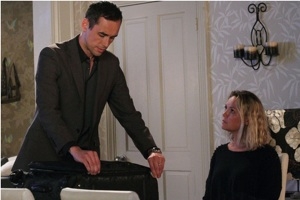 Classic soap scenarios abound as characters jump to the wrong conclusions, make confessions and have affairs. Stay up to date on all the juicy drama coming up on British and Australian soaps.

Coronation Street:
Spoiler alert: Ryan’s return to the Street hasn’t exactly been smooth sailing and it’s about to get even bumpier. After getting high on coke, he gets into a car accident with Sophie in the passenger seat. Unsurprisingly, Ryan bolts from the scene, leaving Sophie to learn she may never walk again.

Gloria returns to see Stella, but is less than impressed by the Rovers. As she reunites with her daughter and granddaughter, the question remains: Why is she back? Take a look at the video below, which might not be available in all areas.

EastEnders:
Spoiler alert: Testing her husband Michael's love for her, Janine presents him with a suitcase full of money. Either he takes the hefty sum, which she fears is what he really wants, and leaves, or he doesn't touch it and stays with her. Quite the quandary.

The cat is out of the bag when Alfie starts to suspect Kat is stepping out on him. Kat confesses when confronted and even admits she might be in love with her secret lover. That can't be good for their marriage.

Emmerdale:
Spoiler alert: After Andy catches Alex kissing Moira, he orders him to end things with Victoria, instead of cheat on her. Victoria takes it badly assuming Alex is seeing someone else. Moira tries to diffuse the situation by admitting she's the other woman, but she just ends up making things worse. Before Moira can tell her son Adam she's seeing Alex the farmhand, Victoria spills the beans. A woman scorned and all.

In hopes of getting him kicked off Home Farm, Katie tries to set Robbie up by antagonizing him, knowing cameras are capturing everything. Robbie takes the bait, but becomes aggressive with her. Will her plan backfire? Watch the preview below, which might not be available in all areas.

Hollyoaks:
Spoiler alert: Theresa gets jealous when she thinks Joel is cheating on her with an older woman. After kneeing him, she embarrassingly learns the woman Joel is with is actually his mother. The drama doesn't stop there though as Joel's abusive stepfather isn't far behind.

Reeling from the tension in their respective relationships, Rhys and Cindy end up in a lip lock. They're interrupted by their significant others, but will Tony and Jacqui see anything incriminating?

Home and Away:
Spoiler alert: After wrongly assuming his fiancée Roo is cozying up to her ex Tim, Harvey heads to the city to visit his daughter. She's not there, but his ex-wife Mel is. Seeking comfort, he sleeps with Mel and then finds out Roo isn't reuniting with Tim after all. Classic soap.

Still coping with having killed his father, Casey heads to the ocean on his surfboard. He doesn't find any peace though, as he falls off his board while recalling the fatal events. The traumatic memories send him in a trance-like state so that he doesn't even realize he's drowning at first. When he finally comes to, will it be too late?

Neighbours:
Spoiler alert: Jordy Lucas has announced she will be leaving the role of Summer Hoyland with her final scenes airing in early 2013. Before that happens though, she will become involved in a storyline that will reportedly test her moral compass.

With Vanessa preparing to take off with Rhys on a three month vacation, Lucas decides it's time to confess his true feelings to the expectant mother of his child. Rhys apparently has the same thing in mind, as Lucas finds a ring in his bag. Looks like it might be too little too late for Lucas.

Get the details on the latest reality show cancellation in Soaps.com's Reality TV Rush. Follow the cast of "Dr. Who" as they make the rounds promoting their new season in Soap Opera Fan's Star Gazing.