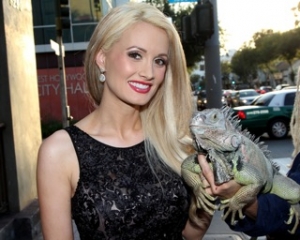 The celebrities are at it again! This week, we say hello to a new little ‘meatball,’ learn about one star’s secret nuptials, and anxiously await a prince’s spread in ‘Playgirl.‘

Holly Madison pregnant!
Former Playboy Playmate and Hugh Hefner’s former girlfriend, Holly Madison, has announced this week that she is pregnant. Madison, 32, had recently announced she wanted to be a mother and began the process of adopting a child, only to find out she is actually three months pregnant, according to US Weekly. The baby’s father, Pasquale Rotella, CEO of Insomniac Events and Madison’s boyfriend of nine months, is overjoyed. According to US, “Holly and I are so excited to announce that we are going to be parents,” he tells People, “We’re in love and counting down the days until we meet our beautiful baby. I can hardly believe how lucky I am.” Rotella currently is out on $1.2 million bail after a grand jury indictment handed down 29 counts against him and three of his business partners after it was discovered they had bribed an official at the Los Angeles Memorial Coliseum with $2 million to allow them to throw the Electric Daisy Carnival and other dance parties at the venue, as well as at its sister location, the L.A. Sports Arena. The charges — which Rotella denies — came about after an investigation into the 2010 death of a 15-year-old girl at the EDC party after overdosing on ecstasy. Becoming parents may be very positive for both of their lives in the upcoming future.

Prince Harry is having one heck of a week!
As previously reported on Soaps.com, photos have surfaced of Prince Harry partying it up (sans clothes) in Las Vegas. Since then, his most recent girlfriend broke up with him, he was offered a guest host position at Chippendales, a pictorial spread for Playgirl magazine, and raced Olympic medalist swimmer, Ryan Lochte, and lost.  According to the Inquisitor, “Chippendales at the Rio All-Suite Hotel and Casino are reaching out to the royalty to gauge his interest in being our next guest host.” A representative explained to TMZ. “We figured that since he seems to enjoy taking his clothes off in Las Vegas, why not do it onstage at the #1 Male Revue in the World.  MSN’s Celebrity Fix reports that Playgirl will pay the young man $1 million to pose nude in their magazine.”  Although females all over the world would love for any of these scenarios to take place, the ‘three strikes’ against Prince Harry this week, plus the lectures from his father Charles, and grandmother, the Queen, may have calmed the “Party Prince” for the time being.

RT @snooki: I am SO IN LOVE with my son Lorenzo Dominic ! I had my little man last night, healthy at 6lbs! HE’S MY WORLD! ❤

Is Rihanna comforting post-breakup Robert Pattinson?!
The Hollywood Gossip is reporting that Rihanna has been texting, and comforting Robert Pattinson since his breakup with Kristen Stewart. “They’ve met several times at award bashes over the years,” says a source close to the couple. “RiRi thinks he’s very cute, but nothing ever came of it because he was attached to Kristen – and it’s not her style to steal someone else’s man.” As previously reported in Celebrity Gossip, Pattinson and Stewart have parted ways since news broke of Stewart’s affair with another man on the set of “Snow White and the Huntsman.” “She got Rob’s phone number from a mutual friend and has been sending him sexy, funny texts to cheer him up,” says the source. “At first, Rob thought someone Punk’d him. Eventually Rihanna convinced him she was for real, but Rob has been resisting her.” What do you think? Should R-Patz and Rihanna date? Post your comments below!

Lindsay Lohan—jewel theif?!
US Weekly is reporting that Lindsay Lohan could be finding herself in loads of trouble—yet again! Sources say that Lohan, who is trying to get her career back together, has been questioned about her connection with a burglary that took place at a home in Los Angeles where she was staying. The Canyons star was staying at the home when thousands of dollars worth of items, including sunglasses and watches, were stolen. When the report became official, Lohan was not being looked at as a suspect in the theft, but TMZ is reporting that she will be formally investigated. Though charges have been dropped, sources are saying that there are “independent witnesses” that can place Lohan’s involvement in the crime. Lohan’s probation for her theft in 2011 for stealing a $2,500 necklace ends in May 2014.

Rosie O’Donnell secretly married in June:
Rosie O’Donnell confirmed that she has married Michelle Rounds in a private ceremony in New Jersey. Because of Rounds’ surgery on June 14 for a cancer-like disease, the two decided to make their vows early. As previously reported on Soaps.com, O’Donnell is recovering after suffering from a silent heart attack last week.

John Mayer and Katy Perry Split:
Stop the presses! John Mayer has split from yet another girlfriend. Sources are reporting that the singer and his secret girlfriend, Katy Perry, have parted ways. As previously reported on SheKnows, Mayer and Perry, who were spotted at various outings throughout the summer, and were rumored to have been dating. A source tells People that, “They’ll end up as friends,” and that “they were honestly having fun” over the summer. According to sources, Perry did not take the breakup lightly. “John did a real number on Katy,” says a source from RadarOnline. “She held off from his advances for the longest time, but he laid on the charm thick and promised her he was a changed man. She eventually gave in, fell head over heels for him and then — yep — once he had made his conquest, he dumped her.” Perry has had her fair share of relationship drama this past year, filing from divorce from husband comedian Russell Brand.

The Count has died:
MSN.com reported that Jerry Nelson, the man behind Count von Count on Sesame Street has passed away at the age of 78.  Nelson was known for his famous Sesame Street characters, such as Count von Count, Sherlock Hemlock, and Mr. Snuffelupagus, making him a member of the popular children’s program for 40 years.  A representative from Sesame Street released a statement following the news of Nelson’s death, saying, "A member of the 'Sesame Street' family for more than 40 years, he will forever be in our hearts and remembered for the artistry in his puppetry, his music, and the laughter he brought to children worldwide through his portrayal of Count von Count, Herry Monster, Fat Blue, Sherlock Hemlock, the Amazing Mumford and many other beloved characters. We will miss his extraordinary spirit and the joy he brought to our Street."  Rest in peace, Count von Count.

Jersey Shore to end after sixth season:
MTV has announced that after a six-season run, the popular reality television success Jersey Shore will come to an end. Set to premiere on October 4 at 10:00 PM, MTV will kick start the finale with a one-hour retrospective, titled 'Gym, Tan, Look Back,' beginning on September 6, airing live from the Staples Center. The nostalgic episode will serve as a "capper" to a Jersey-themed marathon, highlighting some of the most Jersey-licious moments from the past five seasons. Additionally, following the October 4 premiere, MTV will give viewers bonus material, from fan-favorite episodes, reunion specials, and much more. Click the video below to view a preview from the final season!

Shaquille O’Neal and girlfriend split:
The YardBarker is reporting that Shaq and his girlfriend, Nicole 'Hoopz' Alexander, confirmed last week that they had broken up. According to the report, it was because of an incident involving Alexander in a gymnastics facility in Orlando, Florida. Alexander entered the gym to take classes, and was unpleased to find out that they gym did not train people over the age of 18. "She started to curse out the staff and became belligerent. She got extremely loud, screaming at the top of her lungs how she needed to train for the 2016 Olympics," says a source. Poor Shaq was unable to react until the two were in the car, and a heated argument ensued, which factored into the decision for the couple to part ways. Alexander took to her Twitter, refuting the breakup.

Sucks that Ive always been a target 4 untrue, hateful negative rumors. I always wonder how these ppl can sleep at night!

Country singer LeAnn Rimes enters rehab facility for stress, anxiety:
People is reporting that country singer LeAnn Rimes has entered a rehab facility due to stress and anxiety. Rimes voluntarily entered the 30-day program, stating that, "This is just a time for me to emotionally check out for a second and take care of myself and come back in 30 days as the best 30-year-old woman I can be." Rimes’ husband, Eddie Cibrian, told People, "My wife is the most remarkable and courageous woman I know. I am so proud of her for having the strength to finally take some time for herself. I will be with her every step of the way." Rimes, who just celebrated her 30th birthday on Tuesday, will spend weekends touring this fall, while she promotes her upcoming album Spitfire.