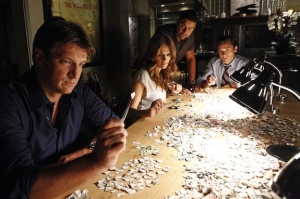 90210:
Say It Right! She appeared on “One Life To Live” and now singing sensation Nelly Furtado will perform in the famous zip code sometime in November. The series returns with a new season on Monday October 8 at 8:00 PM. Incidentally, Furtado’s new CD “The Spirit Indestructible” will be released on September 11.

American Country Awards:
Country music star Trace Adkins, who guest starred on “The Young And The Restless” in May 2008, and actress Kristin Chenoweth (“Glee”) will return to co-host the awards show from Las Vegas this December. “The ACAs honor the best and brightest of country music, from the hotshot breakthrough artists to the icons. I’m looking forward to cutting loose again with Kristin, who’s quite the firecracker comedienne, while we also take viewers through an evening of great music and awards,” said Adkins, to which Chenoweth replied, “I’m excited to return to the ACA stage with Trace and his big personality and even bigger boots. We had a blast last year and I plan to pull out all the stops to make sure everyone has a good time!” The special will air on FOX.

Anger Management:
Winning! Charlie Sheen must be doing something right. FX just announced the show’s renewal, which will include 90 more episodes leading up to 2014.

Boardwalk Empire:
Season three of the HBO series returns on Sunday September 16 at 9:00 PM with the episode “Resolution.” Tune in to our Primetime Dish next week for the start of a season full of weekly scoops!

Breaking Bad:
Mid-Season finale! In Sunday’s September 2 10:00 PM AMC episode titled “Gliding Over All” Walt considers a risky move as loose ends are tied up. In other news, if you’re a DISH customer who is furious that the company is no longer providing you with your favorite series visit Keep AMC Networks to demand your show back!

Castle:
Photo diagnosis! It’s what fans have been waiting for – the return of ABC’s hit series, which resumes with season five on Monday September 24 at 10:00 PM. Until then, take a look at a scene (above) from the premiere episode titled “After The Storm.” Any thoughts as to what Castle and his crew are trying to make sense of this time? Share your theories in the comment section! If that’s not enough to hold you over until the season premiere watch this new promo for what’s yet to come…

Cougar Town:
Ali Wentworth (“It’s Complicated”) took to Twitter to share her first day on the set. The actress will appear sometime during season four as a love interest for Bob Clendenin. As a reminder, the series will begin airing on TBS in 2013 – no longer broadcasted on ABC.

Crossfire Hurricane:
New Rolling Stones film! On Thursday November 15 HBO will premiere the new film documenting the rock ‘n’ roll icons to include key points in their careers as well as the band’s adventures. Don’t have HBO? The film will also be released at select theaters in the fall.

Hawaii Five-O:
Hip-Hop fans around the world, guess who’s coming to the CBS drama? If his current recurring role on Starz’s “Boss” wasn’t enough, Grammy Award winning rapper T.I. will appear as a member of a crime syndicate, in flashbacks, sometime in October. Season three returns on Monday September 24 at 9:00 PM.

Leverage:
Sunday’s September 9 TNT 9:00 PM episode titled “The Broken Wing Job” will have Parker spying on customers of the Brew Pub and discovering a planned heist.

Major Crimes:
In TNT’s Monday September 3 9:00 PM episode titled “The Ecstasy And The Agony” Major Crimes partners with the FBI on a case involving the Israeli mob and a self-proclaimed intuitive life strategist. Provenza appears vulnerable in front of a suspect, and Rusty’s first day of school doesn’t go as planned.

Real Time With Bill Maher:
If you're a fan of the no holds barred news series, there's more to come. The tenth season of HBO's hit will continue on Friday August 31 at 10:00 PM. Look forward to more unique perspectives on current issues, opening monologues, roundtable panel discussions, and in-studio and satellite guest interviews.

Revenge:
Wendy Crewson ("Saving Hope") will guest star as a powerful business executive named Hele, which could be a recurring role. The ABC series returns on Sunday September 30 at 9:00 PM.

Strike Back:
In Friday's September 7 Cinemax 10:00 PM episode Karl Matlock and Jessica Kohl reemerge during a Capetown kidnapping. Information about Peter Evans comes to light. Someone new interferes with a mission, and Scott and Stonebridge make huge mistakes.

Supernatural:
The CW will air a repeat of its April 27 2012 episode titled "The Girl With The Dungeons And Dragons Tattoo" on Wednesday September 5 at 9:00 PM.

The Good Wife:
The series will return to CBS on Sunday September 30 at 9:00 PM and Soaps.com has a list of current guest stars set to appear. Keep on the lookout for Maura Tierney ("The Office"), Rita Wilson ("Body Of Proof"), Kristin Chenoweth ("Glee"), Marc Warren ("Hustle"), Nathan Lane ("Modern Family") and Dominic Chianese ("Boardwalk Empire," "The Sopranos").

The L.A. Complex:
New night! If you haven't already heard the CW has moved its series to a new night. Tune in Mondays at 8:00 PM for more complex drama. September 3 Monday Episode Teasers: While Connor gets life-changing news, Nick finds inspiration in unforeseen places. Raquel reaches a breaking point, Abby is swept off her feet by a handsome stranger, and it looks as though Kal may have met his match.

The Office:
The NBC series will not only be returning on Thursday September 20 at 9:00 PM, we have your first look at the final season's key-art above! Like the old saying goes… A picture is worth a thousand words.

Two And A Half Men:
Miley Cyrus ("The Last Song," "Hannah Montana") has more than just a new haircut these days. The singer/actress has just nabbed a two episode arc as Missi for season ten on the CBS series. The show returns on a new night Thursday September 27 at 8:30 PM.

The Vampire Diaries:
On Thursday September 6 at 8:00 PM the CW will air a repeat of its April 19, 2012 episode titled "Heart Of Darkness." Stay tuned as the series returns with an all new season on Thursday October 11 at 8:00 PM.

True Blood:
Bonus scene! Did last Sunday's finale leave you wanting more blood? Watch a teaser and find out how you can join the interactive fun below!

Until next week, "Coronation Street's" Ryan has another argument with someone, which leads to a big decision. Find out more through Soaps.com's Soap Scoop: UK/Australia Edition. Ever find yourself glimpsing at the celebrity magazines while waiting in line at the store? Don't miss where we spotted some of the stars during their downtime through Soap Opera Fan Blog's Star Gazing.