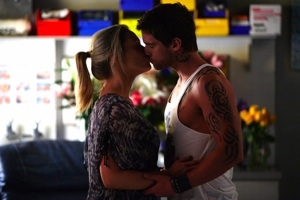 Will Kirsty change her ways after she gives birth on “Coronation Street?” Will Doug’s fake wedding end his relationship with Ste on “Hollyoaks?” Do Bianca and Heath have a future on “Home and Away?” So much drama, so little time. Here’s a peek at what’s to come on British and Australian soap operas.

EastEnders:
Spoiler alert: As Sharon tries to readjust to life back in Walford, she takes her son Dennis out of school when she fears he’s having trouble making friends. She takes him to the R&R, but he takes off. Luckily, she finds him in front of the Queen Vic, where Dennis’ father died. Tanya spots mother and son in an emotional moment and becomes concerned. Could Sharon really be the one in need of a friend?

Not only is Sharon back, but Carly is on her way as well after Phil calls her concerned about Shirley. Even though there’s tension between the mother and daughter, Carly realizes bonding with her mother is a good thing and extends an invitation for her to move in with her. Shirley accepts, but before leaving town, accepts Jay’s apology for his involvement in Heather’s death. She’s not so forgiving when it comes to her ex-fiancé though, as she warns Phil to watch his back. She will return.

Coronation Street:
Spoiler alert: After Tina angrily confronts Kirsty at the Rovers about her role in possibly getting her kicked out of her place, Kirsty goes into labor. Fortunately, midwife Marcus just so happens to be there and helps her deliver. Tyronne shows up as well and the new parents and their healthy daughter are taken to the hospital. Even though everything worked out, Tina experiences backlash for attacking the pregnant Kirsty, but is it really all her fault? Kirsty does have a mean streak after all.

After another argument with his mother Michelle over his drug use, Ryan believes she’d be happier without him. He decides to leave Weatherfield, but uses Michelle’s keys to get into the factory to swipe some traveling money. However, Rob, who doesn’t realize the identity of the thief, attacks him. When he recognizes who he knocks out, Rob considers calling the police, but would that just cause Michelle more pain?

Take a look at one of Michelle and Ryan’s fights from Thursday’s episode, which might not be available in all areas.

Emmerdale:
Spoiler alert: Kerry's lies come back to haunt her when her ex shows up. His presence leaves her in the uncomfortable position of having to explain to her daughter Amy why she lied about her ex beating her up. She also has to cover for the fact that she lied about Amy to the ex. After Amy kicks her mother out, Andy takes Kerry in for the night. However it leads to a longer invitation and eventually a kiss. At least some good is coming out of Kerry's lies.

In Tuesday's episode, Nikhil orders Priya to stay away from David. However, it's not his sister he's worried about, but his best mate David. Take a look in the video, which might not be available in all areas.

Hollyoaks:
Spoiler alert: After Esther has a bad first day at college, she fights with her father Jack. When she walks away, Jack collapses. Thankfully, someone finds him and rushes him to the hospital. Things aren't looking so good for Esther, as she gets blamed for the situation and still has to deal with being bullied at school. She can only be pushed so far though and lashes out at the mean girl making her life hell.

Doug and Leanne's wedding proceeds next week, even though Doug is really gay and seeing Ste. Despite the wedding being Ste's idea so Doug could inherit his grandmother's money, he feels left out and regrets his suggestion. Can he get over his jealousy or is the honeymoon already over for Ste and Doug?

Neighbours:
Spoiler alert: Kyle asks Jade to take him back. She still loves him, but can't quite let go of his dalliance with Kate. She ultimately listens to her heart and reunites with Kyle, but will she live to regret her decision?

When Andrew learns he has epilepsy he tries to keep it a secret from his family and friends. However, he also has to make some changes in his life like no longer driving and taking down the strobe lights at Charlie's. Since he keeps asking for rides, despite owning a brand new car, it doesn’t seem like his secret will stay hidden for very long.

Home and Away:
Spoiler alert: Now that she's had his baby, Bianca starts to rethink her doubts about Heath as a partner. Thankful for his support during their recent situation, she kisses him, which Dex and April arrive to see. Despite April's disapproval, Bianca knows it's something she needs to deicide for herself. Perhaps she should have thought about Heath's reliability factor before having a baby with him.

While Heath faces a possible future with Bianca and their baby, his brother Brax faces rejection when Natalie decides to put their budding relationship on hold. It's for a good reason as the third brother Casey faces prison for killing their father Danny and she doesn’t want him to stop leaning on her because she's dating Brax. While it's a nice gesture, will the pair be able to resist their chemistry?

Find out what's to come on American TV, including which former "Justified" actor will turn up on "CSI: NY," in Soaps.com's Primetime Dish. And find out how the season of "PLL" ends in Soap Opera Fan's Pretty Little Liars season finale recap.