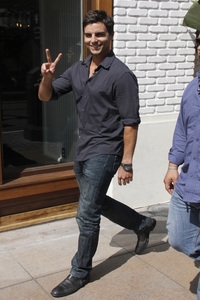 If you’ve been sitting back and wondering what the former actors from the cancelled soap operas “All My Children,” “As The World Turns,” “Guiding Light,” “One Life To Live,” and “Passions” have been doing these days, Soaps.com has the goods. We will never forget Pine Valley, Oakdale, Springfield, Llanview or Harmony, and if you visit our Soap Opera News Rooms, you’ll find these recent top stories…

“All My Children” fans who have enjoyed watching the actor who played Josh Madden on Lifetime’s “The Client List” are in for a treat! Watch Colin Egglesfield’s The Morning Show Video to hear about the show’s return date and what the actor originally thought he’d do as a career.

It’s official, ladies. “All My Children’s” Griffin Castillo may have been single but Jordi Vilasuso is married.

Do you remember Pine Valley’s maid Naomi? The former “All My Children” actress has a lot to celebrate these days. Leave your congratulations for Rosie O’Donnell’s new marriage.

“AMC’s” Colby Chandler has come across her fair share of strange Pine Valley residents over the years. The actress who played her is currently taking part in a movie with zany Hollywood actor Joaquin Phoenix. Get a glimpse of Ambyr Childers’ The Master Trailer for a closer look.

There’s a new TV role for the actress who played “All My Children’s” Marissa Chandler. Find out more about her new character, who’s an employee of a madam, through Brittany Allen in Defiance.

Dre Woods was only in Pine Valley a year before the “AMC” actor set off to join “The Vampire Diaries” then found a home on “Pretty Little Liars” as Nate St. Germain. For more on his upcoming project view Sterling Sulieman to The New Normal.

Who knows what Pine Valley’s Randi Hubbard is up to these days, but the actress who filled the “All My Children” role is keeping busy. Fans can catch her in Primetime since Denise Vasi’s Single Ladies has been renewed for season three.

"One Life To Live's" Natalie Buchanan is dealing with a bit of deception from John McBain at the moment. However, Melissa Archer in Coach Of The Year is keeping the actress busy with other things.

This new project is sure to catch your attention and isn't too far off description-wise regarding Llanview's Officer Antonio Vega. Get the scoop on Kamar de los Reyes in Hot Guys With Guns.

Llanview's Eli Clarke was shot in cold blood but fans of the actor can catch him live on stage, along with another former Daytime star. More details and ticket information can be found on Matt Walton in Under My Skin.

Longtime "One Life To Live" fans have deemed Karen Woleck a character not to forget. Not only is the actress making her way back to Broadway, Judith Light will narrate Scrooge & Marley.

You may not ever want to hear the voice of Llanview's crazed resident Allison Perkins, but we bet you've heard the voice of the actress and didn't even realize it! Take a listen to Barbara Garrick's Commercial Voiceovers to hear if we are right.

If you missed a popular real life soap mother and daughter's baby news read our previous After The Soap Finales: Where Are They Now article, and relive last night's Pretty Little Liars finale recap, which includes live screen shots, to see how the season ended for the ladies.