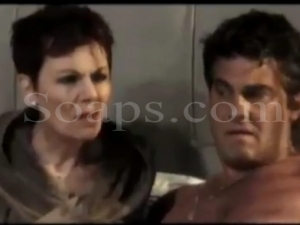 There seems to be a lot of drama and mystery this week with lives at stake and maybe jail time for some.

The Bold And The Beautiful:
Rick plays games in his desire to hook up with Caroline and maybe Hope will fall into the trap. Meanwhile Hope has no trouble dishing out advice to Liam. Appears advice is going around and Bill puts in his two cents too on CBS. The Bold and The Beautiful spoilers keep coming at Soaps.com.

Days of our Lives:
Nicole tells Daniel what she really wants, but it is not what he wants. Gabi figures out that Will slept with her because of Sonny. Will shares with Abby and Rafe is not sure about how he feels about Sami on NBC. Character updates and next week’s spoilers are available at Days of our Lives Spoilers.

General Hospital:
Joe Jr. appears to have a soft spot for Tracy and promises to protect her, hopefully he will get the chance if he escapes Sonny’s gun. Luke is doing alright on his own, but even better with Anna. Jerry makes his demands and leaves Port Charles in need of a hero. General Hospital spoilers is a mystery a minute these days on ABC.

The Young And The Restless
Kevin should be worried this week having been seen by the police and identified in mug shots by Beth. Abby has to explain herself to a security guard while visiting her father’s ranch adding fuel to the fire. Both Cane and Lily try to get answers from Genevieve. Visit Y&R Spoilers and catch up on a few Fall previews.