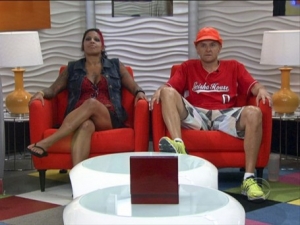 From college cuties to rich rednecks – and John Rich on a horse in Harlem – Soaps.com has all the news you need on your favorite reality shows and stars in this week’s Reality Rush!

America’s Next Top Model:
Has it really been 19 cycles already? This go around, which premieres August 24, the college-theme aims to breath new life into the model competition. It still won’t be able to hide the fact that Nigel and the Jays are gone. Catch a peek below.

Bayou Billionaires:
September 15 brings the season premiere of CMT’s “Bayou Billionaires,” and you won’t believe the stuff these people do with their money – think prepping for an apocalypse, producing a zombie/Kung Fu movie and making the biggest mailbox in Louisiana. Yes please!

Big Brother:
What started out as a bit of a sleeper season has certainly turned around, and last night’s double-eviction was absolutely explosive. Meek little Ian, who for some reason got away with his plan, was able to mastermind the demise of Mike Boogie. Too bad for Dan Frank is still around and channeling his wresting genes and gunning for him. Props to Boogie for his exit interview with Julie – just perfect. Spoiler alert! The new HOH will be revealed August 26 but for those who can’t wait, the live feeds reveal Frank is the winner. Watch out Dan!

Masterchef:
After Monti Carlo was eliminated this week, We are down to the top four home chefs and on August 28, they will have to pair up to present a four-star meal to the three judges. Which three will move on and who will crack under the pressure? The season finale airs September 10.

Hell’s Kitchen:
We are down to the final four in Gordon Ramsey’s pressure cooker of a job interview, and on August 27 at 9:00 PM, they will each get a chance to run the kitchen and lead their fellow chefs through dinner service leading into September 4 finale. They can all withstand a verbal beat down, but only one will win the head chef position, working under Executive Chef Kevin Hee at Gordon Ramsay Steak at the Paris Hotel in Las Vegas.

Keeping Up With The Kardashians:
Another week, another slew of bikini pics and money problems for Kim Kardashian. According to an August 22 report released by “Anti Music,” Kim Kardashian’s former dentist claims the reality star left his office without paying $1,700 ten years ago and now he seeks $3,000 to cover the late interest. A source who claims to have knowledge of the situation has come forward to say that Kim has never used the services of Dr. Gordon.

Mob Wives:
One of the “ladies” is in hot water after her plastic surgeon reports she defamed him on air. Dr. Andrew Klapper is suing Renee Graziano – along with some big companies like The Weinstein Co. and VH1, in Federal Court. The doc says Graziano staged a fake incident in a recovery room for cameras taping her recovery from a full body lift, and fans of the show will not soon forget how horrific the experience seemed. According to Courthouse News Service Klapper has also named former employee, Debra Rossi in the suit, whom he fired for misconduct over the incident. He seeks $10 million for defamation.

The Next:
On August 30, the four mentors roll into New York
and you don't want to miss John Rich ride a horse through Harlem and surprise David. Meanwhile, Joe Jonas meets Frankie’s big Italian family, Gloria Estefan surprises Ali at a nail salon and Nelly helps Baiyu work on her wardrobe and they clean out her closet. At the end, the local contestants perform at the Paramount Theatre. But who will bring down the house?

Project Runway:
Another designer was cut from the cloth last night, and after Ven's behavior over having to design for a "real" woman - translation, not perfect - it would have been great to see him go. Instead, Nathan was sent packing for his gaudy stage look. The new episode airs August 30.

Real Housewives Of New Jersey:
Is it a wrap? According to Reality TV Magazine, it could be. A report states the ladies are not filming season five, and when reached out to on Twitter by a fan, Jacqueline responded by saying that the housewives on the show are taking a break from their jobs. "Hiatus! We all needed this break ;0)," she replied.

So You Think You Can Dance:
This season's newly fast-paced version of "SYTYCD" is down to the top eight and on August 29, they will each be paired up with an all-star partner. Jesse Tyler Ferguson ("Modern Family") will guest-judge.

A new "Beauty and the Beast" is coming to the small screen and the actor is hot! See for yourself in Soaps.com's Primetime Dish. Don't forget to read our Pretty Little Liars recaps each week.