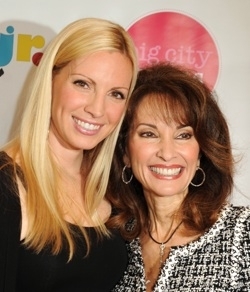 “All My Children’s” Joni Stafford is ready to to go back to 19th Century France as actress Amanda Seyfried plays Cosette in the upcoming film adaptation of “Les Miserable.” See for yourself in Amanda Seyfried’s Les Miserable trailer.

Liza Huber (ex-Gwen, “Passions”) is expecting another baby and is due in January. Read details about “AMC’s” iconic Susan Lucci becoming a grandmother again!

Fans of Pine Valley’s Jackson Montgomery will be happy to know actor Walt Willey has added dates to his “Wild Bill! An Evening with James Butler Hickok.” Get a peek of his one-man show in Walt Willey’s Wild Bill video.

After leaving Pine Valley as Linda, actress Melissa Leo’s star continues to rise. Leo stars as the drug addicted mother of Eli, a piano prodigy. Read about her latest edgy role and watch the trailer for the movie “Why Stop Now.” .

“AMC’S” former Leo DuPres, Josh Duhamel recently tweeted about his new role in 2013’s “Scenic Route,” a film about two college friends who go on a road trip and get stranded in the desert. Get the details in Josh Duhamel In Scenic Route. Duhamel will also be keeping busy tomorrow hosting a live Twitter chat, answering questions about his current film, Safe Haven.

We always knew Pine Valley’s Ruth was funny, and actress Lee Meriwether continues to show off her skills in a new comedic horror film. Lee Meriwether in “Hotel Arthritis”.

The actress who played "One Life To Live's" zany Madame Delphina/Professor Del Fina has now been cast in a new comedy. Read about Lea DeLaria in Ass Backwards..

DeLaria's former costar Wendy Moniz pushed people around as Mayor Kathleen Finn on "OLTL," but her new role as a therapist on "666 Park Avenue" will make her privy to all kinds of good gossip. Read more about her role in Wendy Moniz to 666 Park Avenue.

Occasional Llanview good guy Jackie McNaughton, played by Doc Dougherty, has a new role. Read about the film in Doc Dougherty in 59 Seconds.

Former "One Life To Live" actor Jason Tam (ex-Markko Rivera) has just landed a leading role in a new film. Read about the off-Broadway inspired project Marry Me a Little..

Llanview's Judith Light memorably once played Karen Wolek and has not stopped working since. Read about her new role in Judith Light in The Assembled Parties.

If you missed reading about "AMC's Alicia Minshew's new role, check out the last After The Soap Finales: Where Are They Now article, and don't forget to read our Pretty Little Liars recaps each week.