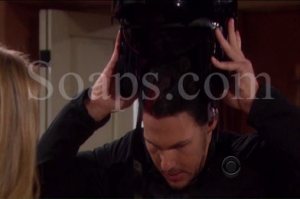 The Bold And The Beautiful:
Thomas and Caroline hung out at her place and shared a few kisses. Meanwhile, Katie filled Bill in on the latest. He couldn’t believe that Hope wanted another wedding. When she brought up what happened with Deacon, he did his best to change the subject with some groping. They all went over to the Forrester mansion to wait for the wedding to commence. Stephanie admitted once again to Hope that she had serious doubts about her marrying Liam when he obviously had feelings for another woman.

Days of our Lives:
“Over at the DiMera warehouse, Samanther hung on Elvis’ fingers as she dangled in mid-air. Although she’s always full of hot air, she only had enough to keep her floating for one episode. They took the opportunity to argue about who should be left to look after the children. Luckily for them, Will arrived just in time to offer to babysit. He helped his mom to safety and she quickly ran off with Elvis, refusing to leave his side. Strangely enough, after she’d admitted that she could barely look after the children, he agreed to let her look after him.” Read more about the goings on in Salem through Matt’s Days of our Lives Musings.

General Hospital:
Todd visited Heather at Ferncliff, where she demanded he get her released. Or else she would tell Sam about Tea’s baby. He couldn’t do that, but when he realized she covered for Steve regarding the death in Memphis, he agreed to help keep things quiet regarding her son, if she agreed to keep quiet with Sam.

The Young And The Restless:
Nikki refused to go on a honeymoon with Jack until she found Victor. Jack warned if Nikki left he wouldn’t be waiting for her when she returned. Nikki left anyway. Meanwhile, Victor resurfaced in a bar and was told a ship would be coming in – and joined a team of workers. Later, Victor ends up in a scuffle and knocked two men out cold.