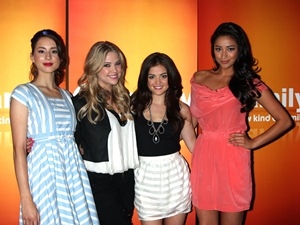 The week of August 20th is busy and depending on who has the remote on Monday night (and a few other nights this week) you could be watching football exhibition games. Lucky for you, you’re checking out what else is in store this week in Primetime right here at Soaps.com where we are sharing some spoilers.

Secret Life of the American Teenager: Regrets.
Henry and Ben discuss their regrets, and they are naming names, Omar and Adrian consider moving in together and someone may be leaving soon…on Monday August 20, at 8:00 PM on ABCFAM.

Alphas: Gaslight.
An alpha goes insane leading to an abduction of Rachel. This episode is horrific; one alpha will see dead people come to life. Meet new characters, a few who will return for at least another episode. A must see for “Alphas” fans on Monday August 20, at 8:00 PM on Syfy.

Warehouse13: No Pain, No Gain.
Missing artifacts lead Artie and Steve on a chase and Mrs. Frederic lunches with Claudia, and there is murder involved. Someone gets shot Monday August 20, at 9:00 PM on Syfy.

Major Crimes: Before and After.
Amidst changes in the department it seems Raydor is working hard to supervise runaway teen Rusty, as hard as the division is working to solve a brutal homicide. “Major Crimes” airs Monday August 20, at 9:00 PM on TNT.

Perception: Lovesick.
Word on the net is that the next episode of Perception, Lovesick, may be one of the best episodes to date. If you love Daniel and Kate it is a must see. There is another guest appearance by “Battlestar Galactica” star, Jamie Bamber, as the troublesome new professor as well to bother the good Dr. Daniel Pierce, Monday August 20, at 10:00 PM on TNT.

Grimm:
This week’s episode “The Kiss” gives mom-to-mom daytime get-togethers new meaning when Grimm’s mom meets up with a hexan beast mom. Do Nick and Adalind hook up again for a kiss? No wait it looks like Captain Renard and Juliet… tune in Monday August 20, at 10:00 PM on NBC and check out that kiss.

Pretty Little Liars: Single Fright Female.
Paige’s violent past is revealed to Spencer this week but that’s not all she finds. She will try to warn Emily soon before the summer finale. You know how friends are, they don’t always listen. Watch “Pretty Little Liars” this Tuesday August 21, at 8:00 PM on ABCFAM.

Hollywood Heights: Loren Deals with the Ex.
Eddie and Chloe are hooking up, seems Eddie wants to be helpful…or more. It seems Loren is not okay with that. The episode Loren deals with the Ex airs Tuesday August 21, at 8:00 PM on TNCK.

The L.A. Complex: Rules of Thirds.
Soaps.com’s The Primetime Dish finds Sabrina will be up to her old tricks in the Rules of Thirds episode on Tuesday August 21, at 9:00 PM on CW.

White Collar: Identity Crisis.
Not sure what they are looking for this week but “White Collar” has some very interesting activities happening. Mozzie is in search of treasure will he find it here on Tuesday August 21, at 9:00 PM on USA?

Covert Affairs: Hello Stranger.
Does the CIA know best? Annie takes a risk trying to turn the Yemen Prime Minister’s Chief of Staff. Meanwhile someone is checking out Annie’s files while she’s turning rogue Tuesday August 21, at 10:00 PM on USA.

Royal Pains: Who’s Your Daddy.
A patient who does not follow doctor’s orders is not the only ailment in this week’s episode of “Royal Pains”. Seems everyone is looking for a cure for love, including the professionals this Wednesday August 22, at 9:00 PM on USA.

Necessary Roughness: Double Fault.
Nico finds a security breach and will he be found snooping around TK’s apartment? Cookie Monster and Girl Scout fans might want to tune in Wednesday August 22, at 10:00 PM on USA.

The Exes: Sister Act.
An amazing party leads to many questions, like does Paul still fancy his ex? It’s a half hour of laughs on Wednesday August 22, at 10:30 PM on TVLAND.

Saving Hope: A New Beginning.
Charlie, in the coma Charlie, has a session with a recently deceased therapist. That is viewer worthy. Check it out on Thursday August 23, at 9:00 PM on NBC.

Anger Management: Charlie Gets Romantic.
News is “Anger Management” is counting on 90 more episodes to bump there numbers up to over 100 episodes. Can anyone say syndication? Episode 10, the season finale, airs this Thursday August 23, at 9:30 PM on FX when Charlie and Kate consider their relationship.

Burn Notice: Desperate Times.
It’s the midseason finale of “Burn Notice” and Kenny Johnson (“The Shield”) makes an appearance as a skilled operative, but not a trustworthy one. The final episode airs Thursday August 23, at 9:00 PM on USA.

Suits: High Noon.
Another season summer finale, and the stakes are high, but Mike is missing just when Harvey needs him the most. USA’s “Suits” airs Thursday August 23, at 10:00 PM.

Rookie Blue: The Rules.
Love gets in the way on “Rookie Blue” with questions of Andy and Sam’s break-up. A priest may be losing his religion as his dark past becomes relative in an investigation of a local drug kingpin this Thursday August 23, at 10:00 PM on ABC.

Boss: Through and Through.
We’re just on the heels of the “Boss” premiere which opened amid controversy after Kelsey Grammer reported he got snubbed by the Emmys during his recent interview with Jay Leno of The “Tonight Show”. Meanwhile “Boss” creator, Farhad Safinia, is worried about the ratings and wonders if the show will be around long enough for viewers to see the story’s end. This week tune in for the second episode on Friday August 24, at 9:00 PM on STARZ.

Leverage: The D.B. Cooper Job.
“Leverage” leaps back to the 70s in The D.B. Cooper Job Sunday August 26, at 9:00 PM on TNT. This episode will be classic and reminiscent of last season’s The Van Gogh Job when the team visited the 40s.

True Blood: Save Yourself.
It’s the fifth-season finale already. Eric tries to rescue Bill and Alcide readies for battle with JD. All are in danger of the Authority. There is speculation about the ending and a mystery face off in the final episode airing Sunday August 26, at 9:00 PM on HBO.

Hell on Wheels: Slaughterhouse.
Things are a right mess but Lily and Elam clean it up and Cullen strives to keep the peace Sunday August 26, at 9:00 PM on AMC.

The Newsroom: The Greater Fool.
Nina Howard shares a secret in the season finale, Neal uses an online alias to uncover a threat and Reese and Leona find themselves on the defensive with Mac and Charlie. View "The Newsroom" season finale Sunday August 26, at 10:00 PM on HBO.

Breaking Bad: Say My Name.
Walt in control and Mike has to deal with the consequences of his own actions this Sunday August 26, at 10:00 PM on AMC.

Grimm fans will want to check out the <a Primetime Dish for a fun fan item for your iPad and visit SoapOperaFan.com’s Star Gazing! for a relatively unattractive photo of Charlie Sheen who hasn’t read the Surgeon General’s Warnings yet.