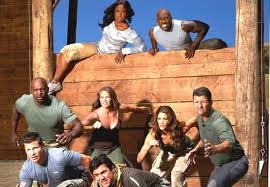 From dragged-out divorces to bikini-clad housewives, Soaps.com has all the news you need on your favorite reality shows and stars in our latest Reality Rush!

Busted!
A man who once appeared on Bravo’s “Millionaire Matchmaker” was sentenced to eight years in federal prison for fraud this week. News reports state that Michael Prozer was not loaded in dough when he showed off a private jet and a sprawling mansion on the TV show. Authorities said those luxury items were bought by the people he swindled. What, these shows aren’t all real?

Under fire:
The new NBC reality show “Stars Earn Stripes” is getting low marks from – Nobel prize winners? Not the typical reality audience, the decorated individuals, including South Africa’s Archbishop Desmond Tutu, have denounced the show in a letter to the network, saying the program was “trying to somehow sanitize war by likening it to an athletic competition.” Oops! Celebs on the show include Todd Palin, Dean Cain and Laila Ali.

Dog days:
Despite rampant rumors that “Duets” Kelly Clarkson’s dog had died, she took to Twitter to set the record straight.

There are rumors going around that my dog Joplin died and just wanted to confirm that is not true. He has been at MedV… say.ly/fFQ3ZcH

Sister love:
The Braxton sisters are back on We’s Braxton Family Values and the season premiere did not disappoint on the drama front. Tamar is still struggling to have a baby. Will sis Towanda carry one for her?

Gold digger?
In the never-ending divorce between Kim Kardashian and Kris Humphries (remember him?), things got even more complicated this week when Humphries upped the awkward factor. TMZ is reporting that Kris Humphries wants $7 million dollars and an annulment or he’s going to drag Kim through a humiliating public trial. Now, is that more or less humiliating than a sex tape with Ray-J? Or more or less embarrassing than being “that guy” who was married to Kim for 72 days? I think we all know the answer to that.

Hot pawn action.
Got junk? Luckily, TruTV has added a new pawn star to their roster. “Hardcore Pawn: Chicago” goes behind the scenes at one of the city’s oldest establishments in the pawn and gold-buying business, Royal Pawn Shop. Run by two over-the-top siblings will wheel and deal with just about anyone.

Situation overseas!
We may have had our fill of the Sitch's abs stateside, but London is about to get a big dose as "Jersey Shore's Mike "The Situation" Sorrentino has joined the cast of "Celebrity Big Brother" as one of the housemates.

Bikini Alert! If you've got it - or paid a lot for it - you better flaunt it. And that is exactly what a bevy of bikini-clad wives from the Bravo franchise did this week. First, "Real Housewife of Miami's" Joanna Krupa donned pink to brazenly read "Fifty Shade Of Grey" with her fiancé Romain Zago on Miami Beach yesterday. The same day, pics of "Real Housewife of Beverly Hill's" Taylor Armstrong hit the web lounging poolside at her Bel Air home. Just a typical Wednesday!

Baby news:
Bigger news than a bikini watch, "Real Housewife of Atlanta's" Kim Zolciak and her NFL-player husband, Kroy Biermann, welcomed their second son, Kash Kade, also on Wednesday. Kash joins big bro Kroy Jr. and Zolciak's two daughters from a previous relationship. A day after the birth and the fam seems to be doing great.

I'm in awe! Absolutely in love with baby Kash!! Such a miracle! Thank you God for our beautiful & healthy son!