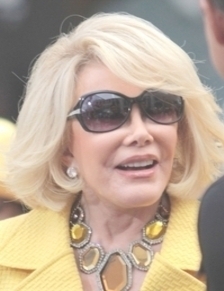 What’s the hot gossip this week?

Ellen Page receives death threats.
According to the Los Angeles Times, actress Ellen Page has received death threats. An anonymous person called the organizers of the L.A. Film Festival and left this message, “I’m going to murder Ellen Page. She’s dead.” The actress starred in “To Rome With Love,” directed by Woody Allen but did not attend the film premier. Police detectives are tracing the sender’s Twitter accounts. Page is best known for her role in the 2007 film “Juno.”

Madonna’s life in danger?
Security has been beefed up in Russia for the remainder of Madonna’s concerts. After a threat of violence the U.S. Embassy in Moscow warned, “The U.S. Consulate General in St. Petersburg has received information regarding a threat of physical violence against spectators and performers at the St. Petersburg concert on August 9. U.S. citizens are reminded to remain vigilant regarding their personal security, and to be aware of their surroundings at all times, especially in crowded areas.” The singer’s spokeswoman, Liz Rosenberg, said Madonna was aware of both the threat and the Embassy’s warning. No specific details about the threats have been released and concerts are going on as scheduled.

Randy Travis, Naked and Arrested!
Authorities said country music star Randy Travis was found naked, apparently smelling of alcohol and lying on a remote stretch of roadway in Texas. Charged with driving while intoxicated he allegedly threatened to shoot troopers who had responded to an anonymous call. He apparently refused to take a blood and breath test but was forced to submit to a judge’s order for a blood sample. Authorities said he was involved in a one-vehicle accident. He was released on bond. It’s his second arrest in 2012 for a DWI.

JLo blackmail victim.
Jennifer Lopez’ former driver Hakob Manoukian allegedly resorted to blackmail after the singer didn’t meet his demands about using a specific security team for a video shoot. Lopez filed a lawsuit against him seeking $20 million in damages. Her suit is a counter suit to one that Manoukian put against Lopez accusing her, her manager and her production company of breaching his employment contract.

Celebrity Plastic Surgeon Secretly Taped Female Patients.
Los Angeles Plastic surgeon for the stars, Dr. Lance Everett Wyatt, has been arrested and is being charged with a dozen misdemeanor counts for videotaping his female patients while they got undressed. A patient discovered a camera in the doctor's office. Dr. Wyatt has appeared on TV shows about plastic surgery including "20/20" and "The Doctors." Deputy City Attorney Richard Kraft said, "The sexual battery and battery counts relate to the way in which the doctor conducted the examination. The evidence of the defendant's violation of his patients' trust and invasion of privacy was compelling."

Joan Rivers protests book ban.
After a Costco in Burbank, California banned her new book, "I Hate Everything... Starting With Me," Joanie staged a protest. According to E! News, the comedienne and author visited the Costco store and held protest by chaining herself to a woman’s shopping cart. Costco felt the book contained racy content. Police were called and Joan was asked to leave the area. This woman loves free publicity.

Happy Birthday Whitney!
It's Whitney Houston's 49th birthday and her daughter Bobbi Kristina and adopted son-turned boyfriend Nick Gordon marked the special day by getting memorial tattoos of doves surrounding Whitney's initials and two small crosses. The tattoos are on their right wrists. Mike Cummings, who personally inked Kristina said, "The doves have a spiritual connotation, flying free I suppose."

Paranormal State star Ryan Buell diagnosed with pancreatic cancer.
Thirty year old Ryan Buell has been diagnosed with pancreatic cancer. Best known for his role in "Paranormal State," the star revealed his diagnosis last month and he's been in and out of the hospital ever since. The television star is communicating with fans through updates on his Facebook page. After attending a retreat for the PRS, he wrote, "I won't lie, I have been in and out of the hospital all week, and sadly some of the PRS Retreat people didn't get to have as much time with me as I had hoped. But to all those who went, you made it a magical event for me." To support others who are fighting cancer or other diseases, he posted a photo of himself on his Facebook page which said 'Cancer: Even the Greatest of Heroes Have to Take the Fight Within … Soldier On!'

Ashlee Simpson’s dad Joe spends the night in jail.
Ashlee Simpson’s father Joe, a former minister, was reportedly arrested for a DUI last weekend in the Sherman Oaks area of Los Angeles. Pulled over by the cops, he was taken to jail for the night. According to TMZ, he won’t face criminal charges but will likely see a fine. Joe manages the careers of both his daughters, Jessica and Ashlee Simpson.

Were you a sweet and innocent girl who's fallen in love with a bad boy? You may just land on a new reality show! Details in Soaps.com's Reality TV Rush and don't forget to read our Pretty Little Liars recaps each week.