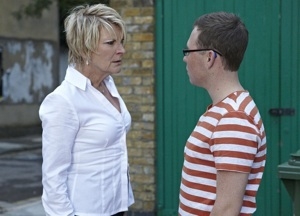 EastEnders:
Spoiler alert: Phil and Shirley celebrate their engagement with a party at The Vic, but Ian’s presence could ruin their happy day considering he knows Phil’s son Ben killed Heather. Ian ratting Ben out is the least of Phil and Ben’s worries though, as Shirley starts to suspect her fiancé is the culprit. Will Ben let his dad take the rap?

“EastEnders” character Billy Mitchell took part in the Olympic torch relay, but the British soap isn’t done celebrating the games. For the August 7 episode, a special scene as been shot of Jean, Tyler and Ray discussing the athletic achievements of Great Britain’s Olympic team.

Coronation Street:
Spoiler alert: Steve’s been trying to reunite with Michelle, even helping out her troubled son Ryan in order to sway her back his way. It looks like his hard work will finally pay off when he steps in between Ryan and his drug dealer. Noticing the positive influence Steve’s been on Ryan, she gives in and kisses her old flame.

Tyrone’s issues with the abusive Kirsty, who decides to leave him, weigh heavily on him and they start to spill over to his work life. Take a look at Tyrone taking it out on Chesney, who just wants Tyrone to fix his van. The video might not be available in all areas.

Eventually, Kirsty gives birth to her and Tyrone's daughter, but the joy of motherhood doesn't lessen her temper any. In fact, a screaming baby might just make things worse, leading Tyrone to contemplate taking his daughter and leaving.

Emmerdale:
Spoiler alert: Now that Chas and Cameron have called it quits, Chas looks to fill the void her secret lover left. She turns to Dan and the two share a fun night out and end up in bed together. The next day, Chas announces to everyone they are now a couple. Is this for real or is Chas just on the rebound?

It's never easy being the other woman, but it might be even worse when said other woman ends up pregnant. That's the situation Rachel finds herself in and becomes enraged when Jai offers to set her up in a place outside the village. How long can Jai keep the secret from his wife? More importantly, will Rachel go along with his plan?

Charity and Rishi offer Carl and Jimmy a deal regarding their failing business. Charity clearly has the upper hand, but the brothers still blow her off. Will they be forced to change their minds? Take a look at Wednesday's episode in the video, which might not be available in all areas.

Hollyoaks:
Spoiler alert: A special episode will air later this month focusing solely on Brendan and Walker's revenge against drug dealer Sampson. When they end up surrounded by cops, Brendan realizes he's been set up and wonders if he can really trust his partner in crime.

Jen's brother Liam shows up in the village next week and learns of her fling with student Tilly. Will the reveal come between the close siblings?

Neighbours:
Saskia Hampele ("City Homicide") has been cast as Toadie's cousin Georgia. She will begin airing in Australia in October and in the UK in November.

Spoiler alert: Kyle's teenaged cousin Harley shows up on his doorstep, but he's there for more than just a friendly visit. It seems he is brought there in a cop car and has a history of legal troubles. Kyle agrees to take him in, but the responsibility might prove to be too much.

Home and Away:
Spoiler alert: Roo may be with Harvey now, but when she lived in New York, she had an affair with married man Tim. Roo is understandably surprised to see him in the Bay hoping to win her back, but it's Harvey who might have the bigger reaction.

Casey's been trying to convince himself he has his shady father handled, but the tables are turned when Danny forces him to assist with an armed robbery. A hostage situation ensues, but luckily big brother Brax and Natalie are hot on their trail. Whether or not they are able to diffuse the situation is another story, as gunshots are fired on the scene.

Heath and Bianca discuss their relationship on Wednesday's episode, but Bianca doesn't exactly like what she hears. Check out the sneak peek, which might not be available in all areas.

‘On My Block’s Jessica Marie Garcia: Why Jasmine & Ruby Are Endgame — ‘They Fit Perfectly’

One of Us Is Lying Finale Recap: Killer Truths — Plus, Potential Season 2 Intel