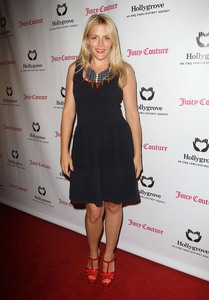 Soaps.com has plenty of Primetime scoops for our readers to look forward to during the week of August 13 and beyond. In our latest Primetime Dish you’ll find episode teasers, casting scoops, encore episode alerts, an honorary episode for an American icon, a season one DVD release, and a possible “Dawson’s Creek” reunion…

666 Park Avenue: “Guiding Light’s” Aubrey Dollar (ex-Marina Cooper) will appear in a guest spot as Annie in the fourth episode of season one. The ABC series premieres Sunday September 30 at 10:00 PM.

90210: Lindsey McKeon (“Supernatural,” “One Tree Hill”) will join the famous zip code as Suzanne. Look for her first appearance in episode three of season five, which returns Monday October 8 at 8:00 PM.

Apartment 23: Hey “Dawson’s Creek” fans, we have some fun casting news! Busy Philipps, who played Audrey Liddell, will be guest starring as herself when fellow “Creek” star James Van Der Beek (Dawson) tries putting together a reunion for his CW series family. Season two returns on Tuesday October 23 at 9:30 PM on ABC.

Body Of Proof: Elyes Gabel (“Game Of Thrones”) has been cast to play Detective Adam Schaeffer in season three of the ABC series.

Breaking Bad: In Sunday’s August 12 10:00 PM AMC episode titled “Dead Freight,” unless they can find the necessary materials, Walt’s team may be forced to cease operations.

Dallas: Did you miss last night’s new episode? Read Soaps.com’s Dallas Weekly Recaps. While you’re looking around our “Dallas” section be sure to vote in the weekly poll too.

Falling Skies: Season finale! “A More Perfect Union” will air on TNT on Sunday August 19 at 9:00 PM. Look for Tom to find out life-changing news, and the 2nd Mass to be faced with their most dangerous threat ever.

Grimm: Josh Stewart (“The Dark Knight Rises”) has been tapped to play Bill in season two, which returns to NBC on Monday August 13 at 10:00 PM. In other news, season one of the series is now available on DVD!

Hannibal: Caroline Dhavernas (“Off The Map”) has been cast in NBC’s new horror series. Look for the actress to appear as a series regular as Dr. Alana Bloom in the mid-season premiere.

Hart Of Dixie: Soapy casting news! Former “Guiding Light” actress Laura Bell Bundy (ex-Marah Shayne Lewis) has landed the role of Shelby. She’ll appear in at least two episodes and will be a possible love interest for George (Scott Porter) – one who will ruffle a few feathers! On Tuesday August 14 at 8:00 PM the CW will air a repeat of its January 23, 2012 episode titled “Hell’s Belles.” Don’t miss the series return on Tuesday October 2 at 8:00 PM.

How I Met Your Mother: Joe Manganiello (“True Blood”) will return to the CBS comedy for two upcoming episodes as Brad. The actor last appeared on September 21, 2009. Season eight premieres on Monday September 24 at 8:00 PM.

Major Crimes: On Monday August 13 at 10:00 PM in the TNT episode titled “Reloaded” Sharon Raydor’s transition as Captain isn’t easy, as the department continues to reel over the departure of Detective Brenda Lee Johnson. Numerous grocery store robberies turn fatal. Detective Amy Sykes is transferred to Major Crimes, and Raydor runs away from his foster family and takes a big step to protect Rusty.

NCIS: During the CBS series’ season ten Robert Wagner (“Two And A Half Men”) will return as DiNozzo’s dad Anthony DiNozzo, Sr. as will Daniel Louis Rivas as Kyle Davis. Keep an eye out for Wagner to turn up in a holiday Christmas episode and Rivas sometime in the beginning of October. Tune in for the season premiere on Tuesday September 25 at 8:00 PM.

New Girl: Nelson Franklin (“Traffic Light,” “The Office”) has been cast to play Robby. The series returns to FOX on Tuesday September 25 at 8:00 PM.

Once Upon A Time: Dual casting news! Irish actor Colin O’Donoghue (“The Clinic”) has landed a recurring role as Captain Hook. Don’t miss his first appearance in the upcoming season’s episode four. “True Blood” fans, get a load of this… Michael Raymond-James (ex-Rene Lenier) has been cast to play a very mysterious character – so mysterious that details are being kept under wraps. Stay tuned!

Perez Hilton All Access: Lady Gaga: The CW will air a repeat of its special on Monday August 13 at 8:00 PM. It originally aired on Thursday May 24 and takes viewers on an unprecedented look into the life of his close friend.

Pretty Little Liars: In Tuesday’s August 14 8:00 PM ABC Family episode titled “What Lies Beneath” Emily and Hannah look for clues about Maya at the Kahn cabin. Noel is investigated by Spencer, and Aria reflects on the details of Ezra’s background. If you ever miss an episode be sure to read Soap Opera Fan’s Pretty Little Liars Recaps.

Rizzoli & Isles: Summer finale! In the Tuesday August 14 TNT 9:00 PM finale episode titled “Melt My Heart To Stone” Jane and Maura must find the killer when a statue breaks open to reveal a dead woman inside. A new homicide detective is named. Lydia goes into labor, and Dennis Rockmond (played by guest star Eddie Cibrian, “The Young And The Restless'” ex-Matt Clark) reappears to try to win Maura back.

Smash: On Sunday August 12 the NBC musical series will honor Marilyn Monroe, who died fifty years ago on August 5, 1962.

Supernatural: On Wednesday August 15 at 9:00 PM the CW will air a repeat of its April 20, 2012 episode titled "Of Grave Importance." And if you happen to have $3.495 million lying around, Jensen Ackles (Dean) and his wife Danneel (ex-Shannon McBain, "OLTL") have just put their 2,636 square-foot Mediterranean home on the market!

The Closer: Series finale! On Monday August 13 at 9:00 PM in TNT's finale episode titled "The Last Word" Billy Burke ("Twilight Saga," Charlie Swan) guest stars as Philip Stroh. In Griffith Park, when a young street hustler sees what appears to be a man burying a woman an investigation ensues. Brenda is sure Philip Stroh will turn up but her obsession with the man could destroy her career - and her life.

The Following: Annie Parisse ("Law & Order," "How To Lose A Guy In 10 Days") has been cast as a series regular in the new FOX thriller, which focuses on a former FBI agent (Kevin Bacon, "8," "Footloose"). Look for the series to premiere mid-season.

The L.A. Complex: In the August 14 9:00 PM CW episode titled "Taking The Day" two's company and three will be a crowd! Tuesday Episode Teasers: Connor helps Raquel, whose troubles intensify and lead to a humiliating offer. Abby’s love life becomes even more complicated after one wild night. Sabrina is left feeling scorned after Nick's guys' night out, and Simon is taken to a six-hour audition.

Touch: Newcomer alert! Lukas Haas ("Inception," "24") will play series regular Calvin Norburg, as well as Saxon Sharbino ("I Spit On Your Grave") as Amelia. Also look for Greg Ellis ("Pirates Of The Caribbean: At World’s End," "24") in a recurring role as Trevor Wilcox. The series returns to FOX with season two on Friday October 26 at 8:00 PM.

Weeds: Natasha Lyonne ("American Pie") will turn up as Tiffani in Showtime's finale on Sunday September 16 at 10:00 PM.

Until next week, view our new Primetime Spoiler Alert and our Celebrity Scoop. What do celebrities do during their downtime? Find out through Soap Opera Fan Blog's Star Gazing - photos included!