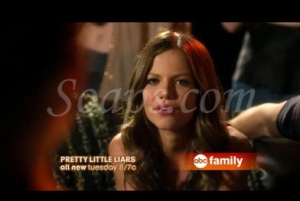 The London 2012 Olympics aren’t the only source of gold on television this week. Here is Soaps.com’s sneak peek at what’s happening in Primetime television.

Burn Notice: Unchained. Allowing himself to be arrested by the FBI, Michael hopes his tactics will bring down a vicious Bostonian mobster. Will his plan backfire? To get information on an important gun sale, Jesse and Pearce are forced to blackmail a weapons manufacturer. Will it go from bad to worse when things don’t go as smoothly as planned?

Dallas: Revelations. Unearthed long buried secrets send shockwaves through Southfork and beyond. Christopher and Elena are rocked by harsh truths about the people closest to them; and the Ewing family is united by a health crisis in this explosive season one finale. Check out Soaps.com’s Dallas Weekly Recaps.

Glee: Yes/No. The Glee kids agree to help Will surprise Emma by sweeping her off her feet. Will she be truly surprised? Artie needs to look out! Becky has her sights set on him. He won’t see it coming; and how will everyone react to Finn’s surprising announcement about his post high school plans?

Pretty Little Liars: In The Kahn Game. At the Kahn brothers’ party, Jenna engages Spencer and Aria in an intense truthfulness game. What truths will be inadvertently or purposely revealed? Elsewhere, ‘A’ sends Hanna another text about Caleb. Uh oh. How will Hanna react? This episode features Tammin Sursok (ex-Colleen, “Y&R”) as Jenna Marshall. Missed an episode? Catch up by reading Soap Opera Fan’s Pretty Little Liars Recaps.

Single Ladies: Stormy Weather. With the threat of a tornado bearing down on Atlanta, everyone runs for cover. Keisha decides to finally commit to Sean. But does his commitment lie somewhere else? Raquel ends up trapped in an elevator with Charles, while April and Reggie’s romantic bliss finds a new twist in their intimacy. What new revelations will spring up on this stormy night? This don't-miss episode features Victoria Rowell (ex-Drucilla, "Y&R") as Veronica Vanderbilt.

True Blood: Gone, Gone, Gone. The rise in vampire violence causes Bill to launch a public-relations campaign that’s favorable to the Authority; a mysterious scroll, discovered by Jason, could help explain his family’s history. Will Jason’s research be a good or bad thing?