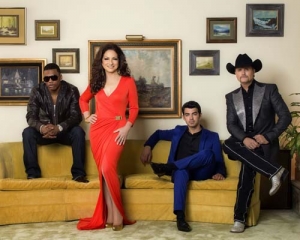 About to fall. (Bravo)

Soaps.com has all the updates, gossip, spoilers and news you need on all of your favorite reality shows and stars in our latest Dose of Reality!

American Idol: We love us some reality love, and we especially like “AI” season cuties DeAndre Brackensick and Jessica Sanchez, who announced last week they are officially dating. Aww! In other “AI” news, could Snoop Dogg be interested in one of the vacant chairs?

America’s Next Top Model: The latest cycle of “ANTM” premieres at the end of the month with the first-ever “College Edition.” This will be the first go-around without Nigel Barker (sad face), who is replaced with former boxer and international male supermodel Rob Evans. Also joining the crew? Social media correspondent and fashion blogger Bryanboy. But will you watch without Nigel and the two Jays?

Big Brother 14:
Well, it was bound to happen sooner or later. Last night the “BB” house guests learned that America voted to give the coaches the option to play the game and compete for the $500,000 prize. Maybe this will shake this somewhat staid season up. But the best part about last night’s episode was learning that Frank’s father is famed wrestler Sid Vicious.

Couples Therapy: Ready for another season of dysfunction? “CT” returns, and this time they have already signed up Alex McCord and Simon VanKempen of “Real Housewives of New York” The pair famously met after an online hookup and has already begun filming.

Dancing With The Stars: With the All-Star cast announced (Pamela Anderson! Apolo Ohno!), the bevy of fan favorites have taken to Twitter to announce their excitement for the upcoming season, and are even getting some celebrity love.

So excited to be a part of the new season of DWTS. Here we go….

Well it is official, I am doing the @dwts all-star season. The Drew Crew is back!!!Get ready to do some serious voting. It is a great cast

The Next: A new singing competition show hits the airwaves in two weeks when "The Next" premieres on the CW. In possibly the most musically diverse group of judges/mentors yet, Nelly, Joe Jonas, John Rich and Gloria Estefan bring their talents to help new singers achieve their goals. How do you think it will fare in the fray?

Real Housewives: Another reality marriage bites the dust. Adrienne Maloof of "RHBH" has filed for divorce from plastic surgeon hubby Paul Nassif. With three young children, they have promised to keep things amicable. Her ironclad prenup should help.

Top Chef: Nothing like the pressure of catering a wedding for 200 people in 24 hours to bring down even the most experienced chef. Someone went home this week, and surprisingly it was not Art Smith with his leaning tower of cake.

Check out our new Celebrity Scoop, found in the latest news section along with our UK & Aussie soap scoop and our Primetime dish and don't forget to read our Pretty Little Liars recaps each week.