Here Comes the Bride (Again): The Female Soap Characters Who’ve Had the Most Weddings 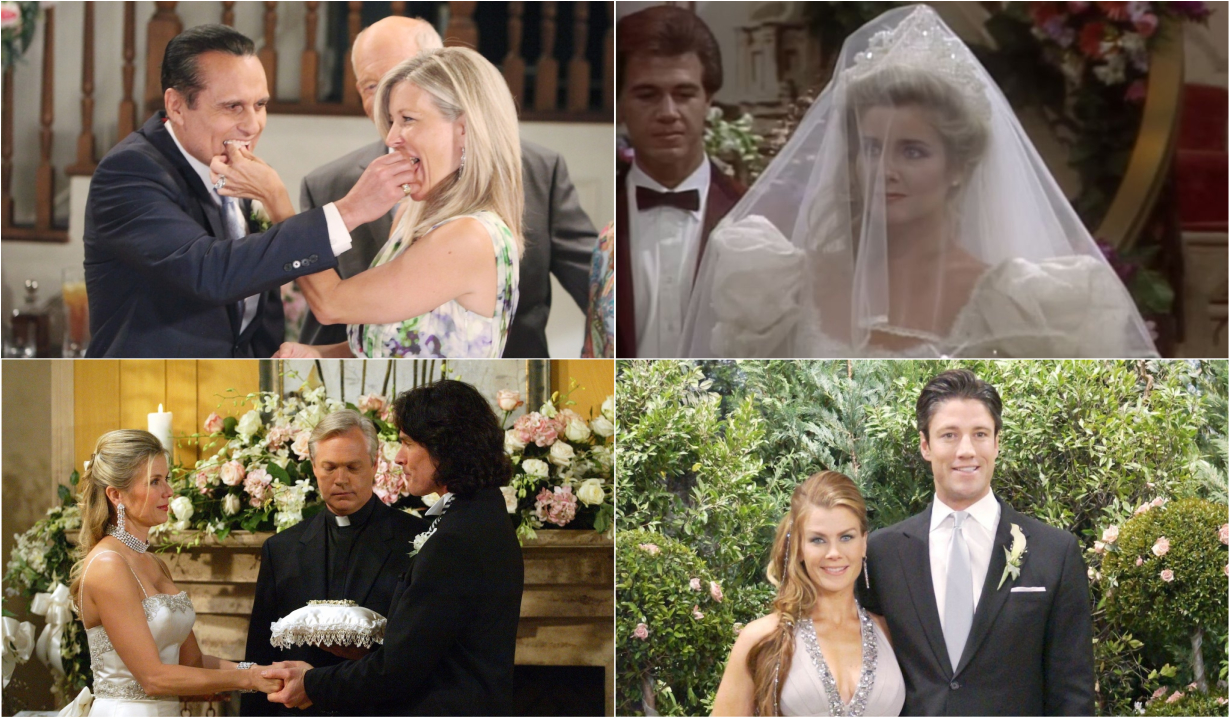 Always the bride, sometimes the wife.

Weddings are a soap opera staple. Though they aren’t the lavish affairs they used to be, some are still on the more extravagant side, while others are performed in a living room (we’re looking at you Bold and Beautiful). Then there’s the occasional ceremony done on the fly for purposes other than love. Whatever the reason for the occasion, there are several daytime heroines who seem addicted to walking down the aisle.

It’s a rare thing when a soap opera wedding goes smoothly and rarer yet when the marriage lasts. Which is why the ladies we’ve highlighted in the gallery below have said ‘I do’ so many times, often to the same person. That person is usually the bride’s true north, destiny, end game, whatever you want to call it, but that doesn’t mean there aren’t a few attempts at happily ever after with someone else in between divorces and annulments.

There’s a lot of competition between the iconic women of daytime vying for most married. A Bold and Beautiful temptress has done it 11 times, with three of her husbands coming from the same family. She’s not alone there as Guiding Light’s serial bride did the same well before her. Meanwhile, Port Charles’ lover of wearing white married the same man four times, but only a couple of their unions were for love.

Of course, with so many weddings there’s sure to be drama to follow. One As the World Turns bride slept with another man the night before her nuptials, while a Days of our Lives wife-to-be threatened to kill her fiancé before one of her many trips down the aisle.

From the outrageous to the romantic, relive the many marriages of daytime’s serial brides in our gallery. Who is your favorite wedding-happy bride? Who did we miss? Start the conversation below!

<p>No surprise that Brooke has been married eleven different times, however, most of those marriages were declared null and void. Many of them were also to Ridge Forrester. Either those two just love the pomp and circumstance, or haven’t taken that hint from the universe that perhaps they shouldn’t be together. Brooke also likes to keep it all in the family and has walked down the aisle twice to Ridge’s father Eric and once to Ridge’s brother Thorne. Maybe Brooke likes being a bride so much because she gets a chance to be the first to wear those Forrester bridal creations.</p>

<p>The self-proclaimed slut of Springfiel tried nine time to make marraige work. This doesn’t include a trip she made down the aisle with Kyle Sampson, whom she left waiting. She never met a Lewis she didn’t like, and married the patriarch H.B., his son Billy, and of course, his other son Joshua. For Reva, she ended where she began. Her first marriage was to beloved “Bud” Josh. She rode off into the sunset with him, perhaps towards another marriage. Of course, this would be all be null and void if presumed dead husband Jeffrey ever returned.</p>

<p>Married eight times, Lisa lived life by the motto, “You’ll never know if you don’t try.” What makes Lisa’s bridal bliss different from the other brides on this is that each of her marriages was to different men. She always was one to follow her heart. Unfortunately, five of her marriages ended because her handsome husbands died and left her a widow.</p>

<p> “I am Erica Kane, and I’m a serial bride.” Erica was married eight different times and likely would have added at least one more to that total. Perhaps her overly high standards kept her wanting to outdo herself. She’s married for love, money, and both. It seems Erica was always trying to make it work with Jackson, as they constantly made their way to and from one another. No one leaves Erica Kane, and while it isn’t clear what happened beyond that final party in Pine Valley, Erica and Jack’s past likely indicates that they reunited in their future for another trip down the aisle.</p>

<p>Viki was the rock of Llanview and loved with all of her heart. This led Viki to walk down the aisle eight different times, beating out frenemy Dorian’s seven marriages. Of course, two of Viki’s marriages were to Clint. She also wasn’t jilted like Dorian was when Clint embarrassed her by kidnapping David on their wedding day. Since Viki and Clint were engaged as we said good-bye to Llanview, Viki would likely have been tied at the top for the most walks down the aisle.</p> <p> </p>

<p>Nikki loves being a bride almost as much as her longtime love, Victor Newman. She’s married seven men, some, like Victor, more than once. She’s even left a man, Brad Carlton, at the altar. Her “always the bride, never the wife” mentality has likely been an inspiration on daughter Victoria and sometime daughter-in-law Sharon, who have both been married several times. Anyone guessing Nikki might just go down in soap history as the serial bride?</p> <p> </p>

<p>While Jill has been a blushing bride nine times, most of those have been declared null and void. Still, no one ever accused Jill of not trying. She’s made the most of her marriages and walked away with companies, seats on the board, and hefty payouts. Although Jill hasn’t been so lucky in love, here’s hoping she’ll stick to her vows the next time she says “I do.”</p> <p> </p>

<p>Carly has always had a one-track mind. If she wants something, she goes for it full force. Unfortunately, her choices with men haven’t led her down the most desirable path. Carly has said “I do” seven different times. Once each to A.J. Quartermaine, Lorenzo Alcazar, and Jasper Jacks. The other four wedding waltzes were to Sonny Corinthos. However, a couple of them were so she couldn’t testify against him in court. After all those divorces between Carly and Sonny, one would think those two would know better, but their latest union seems be sticking. They even had a vow renewal.</p> <p> </p>

<p>Carly must have taken a page from Lisa Miller Hughes Eldridge Shea Colman McColl Mitchell Grimaldi’s book, as she has been a bride six different times. Granted half of those times were to soul mate Jack, whom she eventually ended up with for good. One of their weddings was busted up by Jack’s crazy ex, Julia. While no one could leave Carly at the altar, a fling with ex Mike Kasnoff was cause for one of their breakups. Leave it to Carly to sleep with another man on her wedding night. She and Jack did have a couple of happy weddings, though. During their wedding in Montana, Carly revealed to Jack that he was Sage’s father. Also, after what we hope was Carly’s last turn as a bride, she discovered she and Jack were expecting another baby.</p> <p> </p>

Image: Sami and EJ get married on Days of our Lives
10/10

<p>Though Sami had several weddings, only six made it to the vows, and four were later annulled. Sami racked up quite the list of hottie husbands, including Lucas, Austin, E.J., Rafe, and finally, E.J. again. Quite the drama queen, Sami busted up her sister Carrie’s wedding to Austin by revealing her pregnancy, was left at the altar after Carrie exposed her to Austin, and threatened to kill her husband on their wedding night, just to name a few. That’s our girl!</p>