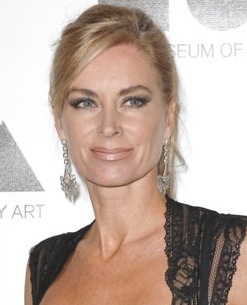 The Bold and the Beautiful:
The month of May saw several familiar soap opera faces pop up in the fictional Los Angeles fashion world. Sean Kanan brought bad boy Deacon Sharpe back home and Crystal Chappell (Gina, “Venice;” ex-Carly, “Days of our Lives;” ex-Olivia, “Guiding Light”) joined the cast as the partner of a long time recurring character. If you missed all the action, check out The Bold and the Beautiful Comings and Goings to find out who Chappell’s character is linked to. In addition, former “One Life to Live” star Nafessa Williams (ex-Deanna) turned up, as did former “As the World Turns” star Jon Hensley (ex-Holden).

Days of our Lives:
The revolving door is getting quite the work out over in Salem, as several more actors are on their way out. It seems Ian Buchanan (Ian), Sarah Brown (Madison) and Joe Mascolo (Stefano) are getting the boot. Charles Shaughnessy (Shane) is exiting as well, but he was only there for a short time to begin with, and Renee Jones (Lexi) will take her final bow in June, but that was her decision. There’s also a rumor going around that Peter Reckell (Bo) could be next to get the axe. It’s not all bad news though, as “Pretty Little Liars” star Brant Daugherty has been cast in a new role. Also, look for a blast from the past to return. Who is it? Check out the Days of our Lives Comings and Goings for the answer.

General Hospital:
Not only did "One Life to Live" characters show up in Port Charles in the form of Florencia Lozano's Tea and Roger Howarth's Todd, but fan favorite Kristina Wagner's Felicia came home as well. May also saw The Real Housewives of Orange County's Alexis Bellino guest star and Lindsey Morgan make her debut as the recast Kristina. Coming up, a former "Passions" star will be hitting town, whose character will be connected to Sonny (Maurice Benard). Any guesses who the actor is? Find out in the General Hospital Comings and Goings.

The Young and the Restless:
Genoa City is a hotbed of casting activity these days. Not only did Lauralee Bell (Christine), Michael Damian (Danny), Kevin Schmidt (Noah), Tristan Rogers (Colin) and Tatyana Ali (Roxanne) return this past month, but the future is looking busy as well. June brings a new Summer Newman in the form of Lindsay Bushman, a new Fenmore Baldwin in the form of Max Erich, Jeff Branson's Ronan, Jerry Douglas as John Abbott's ghost and a guest appearance by comedienne Brett Butler. Sadly, goodbyes must be made as well, as Eileen Davidson is leaving the show as Ashley and Yvonne Zima departs once again as Daisy. Jess Walton's Jill will also be off the canvas for some time, but she'll be back. In addition, the role of Heather Stevens has been recast. Find out which former "As the World Turns" star will be taking over the role at The Young and the Restless Comings and Goings.