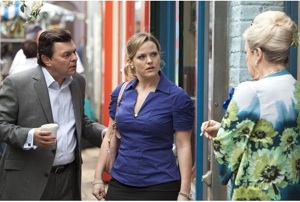 EastEnders:
Casting news: Rachel Bright returns as Poppy next month, while Polly Perkins will leave the role of Rose Cotton later this year.

Spoiler alert: After getting filled in by Tanya on her father, Alice backs off trying to get to know him. Derek realizes Tanya is responsible and confronts her. When Alice reconsiders and reaches out to her shady dad, Derek threatens Tanya’s life if she sticks her nose in again. What would Alice think?

When Kat returns to Albert Square next month, she gets quite the shock when Roxy admits her feelings for Alfie. Despite her making it clear Alfie rejected her advances, Kate kicks her out of The Queen Vic. Maybe Roxy should just keep her mouth shut.

Coronation Street:
Spoiler alert: Rita gets a surprise as she prepares for her wedding day. Unfortunately it’s not a good one, as Rick kidnaps her after Tina tries to get him out of her and Tommy’s life for good. Apparently her plan doesn’t exactly work.

Tyrone tries to do a nice thing by inviting Kirsty’s parents to a surprise birthday party. It completely backfires on him when Kirsty gets into a fight with her father over her life choices. Sadly, she takes it out on her beau once again. Watch a sneak peek of what goes down on Thursday’s episode. The video might not be available in all areas.

Emmerdale:
Spoiler alert: Val returns to home this week, which ends in shock for everyone involved. For more, watch the preview, which might not be available in all areas, of Thursday's episode.

As Alicia is about to confess her feelings to David, the returning Val interrupts and begins putting the chap down. Alicia loses it and clocks her one. While she may feel vindicated standing up for the object of her affections, Val might want to think about reining in her temper when she is faced with going to jail.

Hollyoaks:
Casting news: Singer/actress Montana Manning has confirmed she has left the role of Jodie Wilde, who she began playing in December 2011. In addition, Ashley Margolis also let it be known he is leaving the role of Ricky Campbell, who he has played for three years.

"Hollyoaks Later" will return this summer. The nighttime companion to the soap will consist of five hour-long episodes over the course of one week. Emmett Scanlan will be one of several characters featured.

Spoiler alert: Conflicted over his feelings for Ste, Doug turns to roommates Leanne and Texas for advice. Riley overhears and is stunned by the revelation about Doug's sexuality. Will this change his feelings about his friend?

Neighbours:
Spoiler alert: Andrew, Kyle and Kate take a look at Lou's books and find an $8,000 discrepancy. When Kate confronts him, Lou owns up to taking the money, but guiltily vows to pay Kyle back. Kate's now left with the decision to tell Kyle where the missing money went or to stay mum.

As editor, Susan is determined to run the paper, while empowering her staff, but all her hard work could be bringing out her symptoms of MS. While she tries to keep it under wraps, Paul enlists staffer Fiona to spy on Susan for him.

The summer's heating things up as Kate and Kyle could be hooking up, Summer smooches Griffin and Paul is said to be romancing Zoe. Also look for Rhys to make a memorable house call to Vanessa.

Home and Away:
Spoiler alert: Trying to figure out how to be a better father than his own was to him, Heath heads to the prison to visit dear old dad. Will he get the answers he seeks?

Even though they're apart, Indi and Romeo aren't exactly thrilled to see each other with new people. Romeo's jealous of Logan, while Indi's jealous of Ruby. Sounds like they should just get back together.