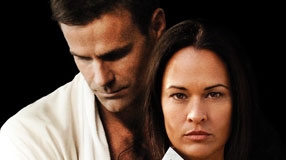 Soaps.com has continued to keep readers posted on the goings-on of the actors from cancelled soap operas “All My Children,” “As The World Turns,” “Guiding Light,” “One Life To Live,” and “Passions.” If you missed the many articles following those from Pine Valley, Oakdale, Springfield, Llanview or Harmony in the various Soap Opera News Rooms, here are a few recent top stories…

This coming Saturday Pine Valley fans can catch two former “All My Children” actors in a Lifetime movie together. Check out Cameron Mathison and Sydney Penny in The Wife He Met Online.

Miss seeing the actress who played Liza on “All My Children?” Be sure to tune in to the CW on April 20 to see Jamie Luner on Supernatural.

Lily and Pine Valley may be gone, but fans can catch Leven Rambin In Percy Jackson and The Olympians: The Sea of Monsters.

Another “AMC” alum (ex-Randi) will be seen in season two of a MTV series. Check out Denise Vasi’s Single Ladies premiere date.

Oakdale’s Emma teamed up with Frannie in our last As The World Turns Fan Fiction. If that isn’t enough to pique your interest, find out what bombshell Chris dropped on Katie as well!

If you missed our last Passions Fan Fiction story, find out why Theresa was facing prison charges and what Whitney revealed!

She may have recently did a crossover role on "General Hospital" as Llanview's Blair Cramer, but now Kassie DePaiva is selling her art.

We may not get to see Llanview's Kim Andrews anymore, but the actress who rocked the role has been keeping busy. Amanda Setton in Golden Boy will have her playing a character named Gemma Bar-Lev.

You may have seen this former "One Life To Live" actor recently in the movie "The Smurfs." Tune in next month to catch Sean Ringgold in NYC 22.

Remember Llanview's mean girl Britney Jennings? Find out what the actress has been up to since leaving Daytime behind through Where Are They Now: Portia Reiners.

Did you miss the actor who played Llanview's Ford in Primetime last week? Watch a video of David A. Gregory on Gossip Girl.