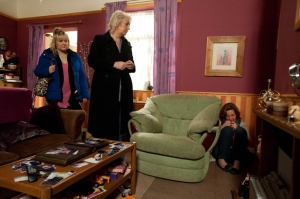 Why is Ste naked on Hollyoaks? (Lime Pictures)

Coronation Street:
Spoiler alert: As Lesley’s dementia worsens, Eileen suggests she move into a care home, but Paul won’t hear of it. Things are complicated enough considering Paul is married to Eileen, but involved with Lesley. Now, Lesley is helping to take care of her lover’s wife and he won’t do what’s necessary to look after her. Will what Eileen later walks in on be the last straw?

Are Tina and Tommy finally getting together? Could be, as the two lock lips after she supports him at Geoff Horton’s funeral. Nothing puts people in the mood quicker on a soap opera than grief.

EastEnders:
Spoiler alert: Now that Phil is out of prison, he tries to take back his power. However, that doesn’t exactly sit well with everyone, especially Derek, who is told his services are no longer needed at R&R. Sounds like the start of a new feud, but how exactly does Ben factor in?

While confiding in Alfie about how she almost got involved with an unavailable man – Max – Roxy realizes she has feelings for the Queen Vic landlord. Except, oh yeah, he’s married. Not exactly a step in a healthier direction Roxy.

Emmerdale:
Former “Emmerdale” actress Jenna-Louise Coleman has been cast in “Doctor Who” as the latest companion for the time-traveling Doctor.

Congratulations to Matthew Wolfenden (David) who beat out “Hollyoaks” star Jorgie Porter (Theresa) to win the latest season of “Dancing on Ice.”

Spoiler alert: Looks like France isn't in the cards for Aaron, as, for some reason, he decides to take the arson rap for Adam. It remains to be seen if Aaron will actually face up to the charges or if he'll panic and skip town. Maybe a future in France is still an option after all.

Hollyoaks:
Spoiler alert: When Ste and Doug have trouble funding their new business, especially after Ste's imaginary naked mishap at the bank, Brendan offers to step in. Ste doesn't want his ex near his new venture, but Doug is more open to the financial assistance. Doug might rethink his decision though when he's later attacked.

It seems they've put the issue of Dodger behind them as Texas and Jodie decide to move forward with their relationship. But is Sapphic love really what Texas wants?

Neighbours:
Spoiler alert: Lucas thought he was engaging in a harmless one-night-stand, but he gets quite the shock when Vanessa tells him she's pregnant. Who thinks Lucas will step up to the plate? Yeah, we don’t either.

Looking to make extra cash, Jade offers a match-making boot camp and convinces Kyle to help play up their own relationship for effect. Will her latest venture work or is it a recipe for disaster especially when Kate sets her sights on Kyle?

Home and Away:
Spoiler alert: Despite Bianca and Liam trying to keep the baby's paternity a secret, April decides Heath should know he's a daddy. We can't imagine this will go well.

Looks like someone's hot for teacher as Casey finds himself in another lip lock with Henri. Will their kisses lead to anything more? More importantly, will they get caught?