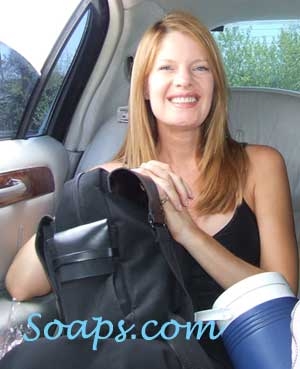 Have you ever wondered how much alike an actor is to their portrayer? We have. We’ve often wondered how much of their own personality eventually melds into their own character, if at all, and especially for those characters we love to hate! We found some revealing answers from some of your favorite actors!

Lori Wilson spoke with Renee Jones, who portrays Alexandra Carver, on Days of our Lives, recently. Renee discussed the similarities and differences between her character, Lexi, and herself. “I’m not as serious as Lexie. I’m not as professional and polished as Lexis is. I’m more free spirited and spiritual and kooky.”

Lori Wilson went on to talk with Christopher Maleki, who, if you recall, portrayed psycho, ‘Spike’, on Passions. (Read more here.) Spike has always been a frightening and nasty character, on the show. Christopher played the part very well, and Lori had a little fun, asking him, “Even though he’s a despicable character, are there any similarities between you and Spike?”

Christopher tells her, “If I said no I would be lying. Obviously I don’t kill people, I don’t sell
drugs, I don’t pimp out ladies, but there’s a little part of me in everything I do. I will just leave at yes there’s a part of me in there and let the readers figure that out.”

Christine Fix sat down with Michelle Stafford (Phyllis Newman) read more on that interview here in May this year. Because there has always been such a pitting of the characters of Phyllis and Sharon (Sharon Case), we wanted fans to realize that Phyllis is a mere character, and played by a fantastic actress. On differences, Michelle joked that Phyllis has bigger breasts than she does and then after the laughter died down, Michelle says, "I'd like to think I'm more moral than my friend Phyllis!" Because of the country music Phyllis enjoys, we had to ask if Michelle was a true country fan. "I personally am. The writer who wrote all that stuff when they went to the country bar in Santa Fe and she (Phyllis) knew how to line dance out of the blue… " Read the rest in the interview link above!

Lori Wilson asked Kim Johnston Ulrich (Ivy Winthrop Crane, in the now defunct Passions), "Are there any similarities between you and Ivy?"

Kim laughs. "You’ll have to ask my husband (laughs). I don’t think so,” she said and then added, “Maybe. I love my children very much, as she did.” Read more about Kim, here, in the same interview.

Kristi Knight said to Chrishell Stause (Amanda Dillon, AMC), "Some fans have written in to ask a few questions. First, how is Amanda like Chrishell?"

Chrishell tells her, "Well, we both like makeup and we both need to keep tabs on our mothers - ha!"

Kristi Knight also spoke with Alicia Minshew (Kendall, AMC), who said, "Kendall is like Alicia in a lot of ways that I hate to admit! She can be a little high-strung. I'm not as high-strung as her but I do get wound up like she does. On the flip side, she is also very loving when it comes to the people in her life and I am, too.  But, I'm funnier than Kendall! Maybe they'll lighten her up and make her funny!"

Matthew Purvis spoke with Murray Bartlett (Cyrus, GL). "Cyrus is adventurous, loves to travel, and is prone to romantic entanglements. That's kinda like me. But I prefer to make an honest living. Unlike Cyrus."

Amy Mistretta spoke with Kamar de los Reyes (OLTL's Antonio Vega)… "I'd like to think Antonio is honest, loyal and passionate. That could describe who I am as a person. I'm also a little more sensitive"

Amy Mistretta also asked Kathy Brier (Marcie McBain, One Life to Live) how she sees herself in relation to Marcie. She says, "I'm a loyal friend like Marcie but different - as I'm not a romantic. However, this role has taught me to be more of a romantic. Marcie's more of a girly girl than I am."

Amy Mistretta also spoke with another <One Life to Live actor, Jason Tam (Markko) and he tells her, "I'm extremely loyal to my best friends."

Roy Steinberg At The Cape May Stage!

Variety to Honor 2021 10 Innovators to Watch With Virtual Conversation