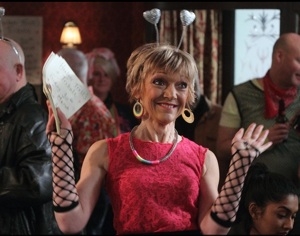 Together on Neighbours? (Grundy Television)

Coronation Street:
Spoiler alert: Now that Audrey is back with Lewis, her family does what they can to protect her from the former conman. For starters, David refuses to sign the salon back over to his grandmother, preventing her from paying for a trip around the world with Lewis. While this tactic might keep her finances secure, it might not do their relationship any favors.

Are Sally and Kevin getting back together? Could be, as Kevin is quick to comfort a distraught Sally after she learns Anne killed Frank. Nothing like a grisly murder to reignite the flames.

EastEnders:
Spoiler alert: After being made events manager at the pub, Jean decides to throw a party in Heather’s memory. She goes retro with an 80s theme, but apparently not all the guests are into fishnets and loud hair as Shirley accuses everyone of laughing at Heather. Maybe Jean should have gone with a 70s theme?

After Ian and Mandy get into a row, Mandy leaves her engagement ring at home and walks out. When Mandy decides to leave Walford, Ian tries to change her mind by popping the question again. Second time’s the charm?

Emmerdale:
Spoiler alert: Sandy is hurt after enraging his son Ashley when he makes a mess at home. It remains to be seen if Sandy will tell anyone about it, but if he doesn’t, Rachel might since she already suspects Ashley is abusing his father.

Aaron knew Ed would be leaving for France and decided to just enjoy the time they had. Now that Ed's trip is quickly approaching, Aaron feels they might as well call things off. However, Ed surprises Aaron by inviting him along. Will Aaron take a chance on love or will his loyalty to Adam prevent him from doing so?

Hollyoaks:
Spoiler alert: Darren and Nancy are finally happily married with a child on the way, but things take a nasty turn when Nancy collapses to the floor in pain. Is the baby okay?

There must be something going around Hollyoaks because college student Ash also collapses. When she's taken to the hospital, her brother Callum and mother Martha have interesting reactions. Let's just say neither one is very supportive in Ash's time of need.

Home and Away:
Spoiler alert: After Brax is hospitalized when he takes too many blows to the head, Leah rushes to his side. The fallen cage fighter realizes Leah has feelings for him, but considering he's still in mourning over Charlie, he might not be quite ready to jump into something new. But then again, it is a soap after all.

After admitting to her father that she killed Stu, Sasha is relieved when Sid vows to protect her. He hires Morag as her lawyer, who brings Sasha to the police station so she can confess. It seems she has a clear-cut case of self-defense, but will the cops see it that way?

Neighbours:
Spoiler alert: Even though Kate's back, she and Sophie decide it's best if they separate for a while, so Kate turns to Paul to be her sister's legal guardian. Since he was previously denied guardianship of Harry, will he be cleared to take her in? More importantly, does Paul even want to be responsible for his teenage niece?

Emilia can't stop thinking about Michael's kiss. Michael is ready to tell Emilia how he feels. And poor Lucas is oblivious to it all. It sounds like a recipe for heartbreak.