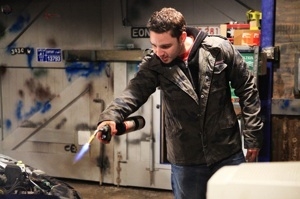 Caught in the act on Hollyoaks. (E4)

EastEnders:
In a shocking and sad turn of real life events, former “EastEnders” actress Gemma McCluskie’s (ex-Kerry) decapitated torso was discovered last week in the Regent’s Canal in Hackney, East London. Her brother has been arrested for the murder.

Executive producer Byran Kirkwood will step down from his position on the soap. “EastEnders” producer Lorraine Newman will fill in.

Spoiler alert: Phil sets out to protect his son Ben after he kills Heather. It seems Jay is with Ben at the time, so Phil makes it look like Heather was the victim of a burglary and destroys all the evidence linking the two boys. An already freaked out Jay might have more trouble ahead, as the strangely calm Ben snags Jay’s hoodie before Phil can destroy it with the other evidence. Watch your back Jay.

Coronation Street:
Spoiler alert: After discovering who killed Frank Foster, Sally comes face to face with the guilty party and ends up unconscious. Will the killer claim a second victim?

Knowing that her family will be less than pleased by her reunion with former con artist Lewis, the duo keeps their relationship a secret. While they have fun sneaking around, the word eventually gets out and then the sparks really start to fly.

Emmerdale:
Spoiler alert: Moira isn’t too pleased with her family these days as she blames them for not noticing how unhappy Holly was, which led her back to heroin. She then has doubts over Adam’s role as farm manager and asks Andy to take over.

Adam's obviously having a bad time of it, as in addition to his problems on the farm, he's none too pleased that his family feels gratitude to Cain for saving Holly. So, he decides to do what any rational person would and sets fire to the garage leaving Cain locked inside. What would you do?

Hollyoaks:
The South London trio Stooshe has filmed scenes performing in the Hollyoaks SU Bar, which will air the last week of March.

Spoiler alert: Riley reaches out to Mercedes by suggesting they celebrate Bobby's christening together. He even lets her watch their son as he attends an awards ceremony. While Mercedes feels a sense of hope for their future, Riley cozies up to Mitzeee, which is caught by the paparazzi. You can probably guess how Mercedes will react upon seeing their photo in the paper.

Neighbours:
Spoiler alert: Susan is there for Karl in the aftermath of an old friend's death, which doesn't exactly help his relationship with Jessica.

Still in Port Douglas, Kate calls Sophie and rails at her for getting expelled from school. Upset, Sophie rejects her sister, assuming Susan will step up for her. Where will Sophie turn when Susan declines to get involved?

Home and Away:
Spoiler alert: Despite getting knocked unconscious during a burglary, Brax rebounds in time for his next cage fight. Even though he wins, he still ends up passing out and is rushed to the hospital. Apparently, a person can only take so many blows to the head.

A married and pregnant Bianca's blissful life might get shattered when she learns she's further along in the pregnancy than she thought. This leaves her in the classic soap pickle: Is the baby her husband Liam's or ex-lover Heath's?