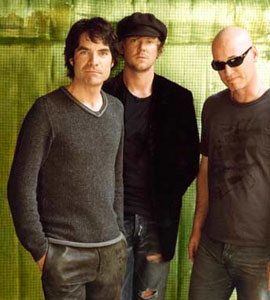 Soaps.com has plenty of Primetime scoops for our readers to look forward to during the week of March 12 and beyond. In our latest Primetime Dish column you’ll find episode teasers, casting scoops, contract news, timeslot changes, repeat alerts and which rock band will be appearing in a popular zip code.

40: If you were anticipating the HBO comedy pilot that was set to surround four close friends, who help each other take life by the horns at 40, we have some bad news. The network has decided not to go ahead with the project, created by Doug Ellin (“Entourage”).

90210: Grammy Award-Winning band Train will perform, and La Toya Jackson will guest star as a record executive on the CW on March 13 at 8:00 PM. Tuesday Episode Teasers: Naomi realizes she and her sister are interested in the same man. Dixon is offered a recording contract. Adrianna suspects Vanessa staged the near drowning incident.

Americana: The new ABC pilot has just cast “Twilight Saga” star Ashley Green (Forks’ Alice) as a young designer. Look for her character’s arrival in town to have an effect on a family-owned fashion empire.

American Horror Story: Zachary Quinto (“Heroes”) will return to season two of the FX drama, except this time his character, Chad Warwick, will be a series regular.

Anger Management: More casting scoops for FX’s new Charlie Sheen series… Keep an eye out for the new bartender named Brett at the place where Charlie hangs out. The recurring role will be played by “Grace Under Fire” star Brett Butler. Tune in June 28 at 9:00 PM for its premiere.

Applebaum: The new CBS pilot, which surrounds Juliet Applebaum’s transition from public defender to private investigator in an attempt to relinquish her boredom as a stay-at-home mom, has cast “The Twilight Saga’s” original Victoria, Rachelle Lefevre, in the lead role.

Beauty And The Beast: We reported a few weeks back that the CW was launching a new series by the same name – and so is ABC. In ABC’s upcoming version, Ruth Bradley (“Titanic”) has landed the lead ‘beauty’ role as Princess Grace. In the CW version, New Zealand actor Jay Ryan (“Terra Nova,” “Neighbours”) just landed the male lead role as Vincent Koslow.

Castle: Adam Baldwin (“Chuck,” “Jag”) has been cast in a guest-starring spring role as a rough detective named Ethan Slaughter. The series airs Mondays at 10:00 PM on ABC.

Community: The NBC series returns with its spring premier on Thursday March 15.

Gossip Girl: Warner Bros. is currently looking to bring an adaption of its hit show to Mandarin-lingo audiences in China into television production. The still untitled series will surround a group of collegiates from Shanghai Intl. U.

Grimm: David Zayas (“Dexter”) will be turning up in episode 19 titled “Leave It To The Beavers.” He’ll play a city building inspector named Sal, who runs into a problem while heading up a racketeering scheme. Tune in Fridays at 9:00 PM on NBC.

Happily Divorced: Morgan Fairchild (“The Bold And The Beautiful,” Fashion House) will be turning up in the sitcom as Jill – Fran’s archenemy from college. Keep an eye out for her in an upcoming episode where the two will have a showdown at a college reunion. The show airs on TV Land Wednesdays at 10:30 PM.

Hart Of Dixie: A repeat of the February 13 episode titled “Aliens & Aliases” will air on Monday March 12.

Hawaii Five-0: Alex O’Loughlin, who plays task force leader Steve McGarrett, will have to sit out at least one episode in the CBS series. A rep for Alex stated, “Alex is taking a short break from “Hawaii Five-0″ to receive supervised treatment for prescription pain medication due to a recent shoulder injury.” Soaps.com wishes Alex a speedy recovery!

In Plain Sight: It’s the final season for this USA drama, so don’t miss its premiere on Friday March 16.

Lady Friends: “Cougar Town’s” leading guy Josh Hopkins has been cast in the new NBC pilot surrounding two lifetime female friends. With Josh playing the wife of ‘Nicole’, what will this mean for his “Cougar Town” role? Unless he plans to do double duty, within two different networks, and if the show gets picked up for a fourth season, it’s highly likely ABC will recast the role of Grayson Ellis. In other casting news, Minnie Driver (“Web Therapy,” “Modern Family”) will play Jen. Her character is Nicole’s rock, but she’ll need one too – after getting dumped from a 17-day marriage.

Luck: In HBO’s 9:00 PM Sunday March 18 episode Smythe has other ideas when Ace tries to pull the plug on a deal. Walter enters Getting’ Up Morning in the $1 million Western Derby, and Leon loses his mount when unable to make weight.

Revenge: Series star Madeleine Stowe (Victoria Grayson) will direct her new screenplay "The Unbound Captives." The actress is currently casting for the project, which surrounds a widow who searches for her kidnapped children after being rescued by a frontiersman.

Ringer: "One Life To Live" fans, tune in on March 13 to see Nic Robuck guest star. Tuesday Episode Teasers: Bridget fears for Malcolm's safety when she can't get a hold of him and discovers that Andrew was the last to see him. Juliet realizes someone in her family was involved in the attack on Tessa. Siobhan tells Henry why she faked her death.

One Tree Hill: On Wednesday April 4 the show will air the last episode in its final ninth season. The two-hour finale will also have a special segment to include the cast looking back on their most memorable moments.

Once Upon A Time: If you don't like spoilers, turn away now. Here are some new scoops on what's set to happen during this season… Emma starts to suspect something's up regarding Henry's tall tales. David feels guilty about Kathryn's absence. There will be an obstacle to overcome before Kathryn's vanishing is resolved. Sidney Glass and Sheriff Graham will reappear. August's identity is revealed, as will the reason why the evil Queen hates Snow White so much. Tune in Sundays at 8:00 PM on ABC.

Terra Nova: After one season FOX has canceled its drama series. Show head-runner Jason O’Mara (Jim Shannon) tweeted, "We’re gonna try and get another network to do it. Stand by."

The Big Bang Theory: Leonard Nimoy ("Star Trek") will make a cameo appearance in the March 29 episode. Look for him to fulfill Sheldon’s lifelong dream, speaking as Spock in a dream sequence.

The Finder: The FOX series will no longer air on Thursdays. Starting on April 6, it will be seen on Fridays at 8:00 PM. Look for rapper 50 Cent to air during its timeslot change premiere date.

The Secret Circle: Alexia Fast ("Supernatural") guest stars as Lee's girlfriend. As reported a few weeks back, Tim Phillipps arrives in Chance Harbor. Look for Melissa to urge Diane to date him - a normal guy. More March 15 Thursday Episode Teasers: Cassie catches her father lurking around the house. Faye is stunned to hear Ann introduce herself as Lee's girlfriend.

White Van Man: The new ABC pilot has cast former "The Talk" co-host Leah Remini ("King Of Queens") as Terry, a licensed masseuse, in the series that surrounds a man who has to put his dreams aside while taking over his father's handyman business.

‘The Artist’s Wife’ Review: Lena Olin and Bruce Dern Excel in Tom Dolby’s Drama About a Couple Coping With the Husband’s Alzheimer’s