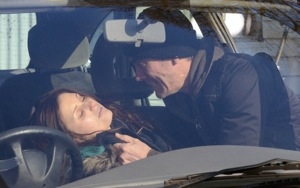 Spoiler alert: When both women look guilty for the crime, Carla and Michelle take matters into their own hands when they decide to destroy important evidence in Frank’s murder.

Stella accuses her staff at Rovers Return of stealing from her, when it fact, her partner Karl turns out to be the culprit. Only slightly embarrassing.

EastEnders:
Spoiler alert: Phil will get a BBC Red Button episode, which will go inside prison with him. Viewers will watch as things get dicey for Phil, while he shows a new prisoner the ropes. The special episode will air on March 12 immediately after the soap’s regular episode.

Max accompanies Tanya when she goes to the hospital for an MRI. As she wonders if he would stick by her upon getting bad news, he gets a flirtatious message from Roxy. Who will he choose?

Emmerdale:
Danny Miller filmed his last scenes as Aaron Livesy on March 2, with his final episode to air on April 5. His exit, reportedly to take place at an airport, is being kept under wraps, but keeping tissues handy might be a good idea.

Spoiler alert: While coping with her dad's death, Holly resorts to her old ways when she uses heroin again. In an interesting twist of fate, it's Cain who finds her passed out after she overdoses and rushes to get her help. Will enemies become friends?

Hollyoaks:
Channel 4 is looking for companies to produce a tie-in app, which will provide additional content based on the British soap.

Spoiler alert: Now that human traffickers Deena and Graham have Phoebe and George back in their clutches, they go to great lengths to make them do what they want. These kids just can't catch a break.

Neighbours:
Simmone Mackinnon ("McLeod's Daughters," "Baywatch") will guest star on the Australian soap as Zoe Alexander, Paul's publicist. She will be airing in May.

Dieter Brummer will return as Troy Miller later this year. The character was last seen in 2011 making trouble for his ex Sonya. Wonder what he has planned this time around.

Home and Away:
Spoiler alert: April learns Heath has been cheating on her with Henri. In unsurprising news, she promptly breaks up with him.

Casey gets more than he bargained for when he joins Tyler on a camping trip. Instead of ghost stories and bonding around the campfire, Tyler pulls a knife on his former juvenile detention mate. Will Casey make it out of the woods alive?