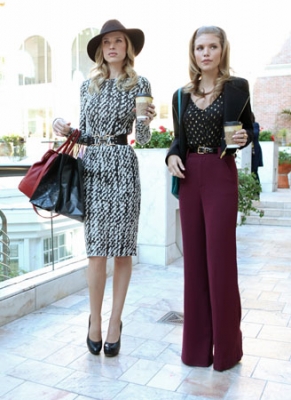 Soaps.com has plenty of Primetime scoops for our readers to look forward to during the week of March 5 and beyond. In our latest Primetime Dish column you’ll find episode teasers, plenty of casting scoops, new pilot details, and network premieres.

666 Park Avenue: Last week Soaps.com reported that Terry O’Quinn would be starring in ABC’s supernatural pilot and now we have more details. Former “Brothers & Sisters” star Dave Annable’s character will be one half of the couple who accepts the challenge to manage the historic New York City apartment building.

90210: Sara Foster returns to guest star as Naomi’s sister Jen in the CW episode “Babies In Toyland” at 8:00 PM. Tuesday Episode Teasers: Jen arrives with her son for a surprise visit. Vanessa sabotages Adrianna and Dixon’s meeting with a major movie producer. While Ivy attracts the attention of an underground scene, Silver is accepted into New York University.

Anger Management: Charlie Sheen’s new FX series will debut with two back to back half hour episodes starting at 9:00 PM on June 28.

Carrie Diaries: The new CW pilot, which is based off Candace Bushnell’s novel of the same name – a prequel to “Sex And The City” – will take viewers on a journey of Carrie Bradshaw’s entrance into adulthood. The series will take place in 80s Manhattan and will explore some of Carrie’s first questions of love, sex, friendship and family while attending high school. So who’s playing the starring role? Soaps.com has learned that AnnaSophia Robb (“Jumper,” “Race To Witch Mountain”) has landed the role, which was tested by numerous actresses! As of yet, the network hasn’t set a date for its premiere.

Castle: Aussie Brett Tucker (“Spartacus: Vengeance,” “Neighbours”) will appear in episode 20 titled “The Limey” as Scotland Yard Detective Simon Hunt, who, along with Castle and Beckett, try to hunt down the murderer of his friend’s daughter.

Desperate Housewives: Scott Bakula (“Men Of A Certain Age,” “Chuck”) has been cast for a multi-episode arc to help show runner Bree (Marcia Cross). Keep an eye out for his character, an ambitious attorney, to show up sometime during the ABC show’s final episodes, leading up to the eighth and final season finale in May.

Fairly Legal: Season two of the USA Network series will premiere on Friday March 16 at 9:00 PM. With a new hunk coming to town, tensions will remain in high gear for Kate and her estranged husband Justin.

First Cut: Michael Rady (“The Mentalist,” “Melrose Place”) has been cast in the new CW medical-themed series, which follows a new doctor who soon finds out that high school isn’t much different than the hospital where she works.

Hart Of Dixie: Kaitlyn Black (“Raising Hope,” “Cole Case”) returns to guest star as AnnaBeth at 9:00 PM on the CW. Monday Episode Teasers: Zoe’s friends wonder what’s behind her sudden happiness as of late. AnnaBeth doesn’t want Lemon to find out about her friendship with Zoe. Lemon has to overcome obstacles to became Belles’ new Memory Matron.

I Hate My Teenage Daughter: Soaps.com was in on a conference call this week where Mark Consuelos (ex-Mateo, “All My Children”), who will be appearing in the FOX series as Spanish teacher Carlos Castillo, talked about one of his most memorable moments taping the show. “Yes, there was this one time. I guess I’m teaching the class how to say burrito as I’m spelling it; you know, B U R R I T T O, or however you spell it, and I spelled it incorrectly and it was a take and people were just cracking up. I like what, what’s wrong? And you spelled burrito wrong. It was just hysterical, it was very embarrassing.” Tune in March 6 and 13.

Luck: During the Sunday March 11 episode at 9:00 PM on HBO, Ace and Claire tour a prison outreach horse retirement farm, Jerry and Naomi try to win their way into a poker tournament, and Walter has to make a decision about which jockey will ride Gettin’Up Morning next.

Revenge: There's another death set to happen on the horizon. All we can tell you at this time is it's going to be very surprising.

Ringer: Nikki DeLoach ("Days of our Lives," "The Defenders") guest stars as stripper Shaylene Briggs in the episode "You're Way Too Pretty To Go To Jail" on the CW series at 9:00 PM. Tuesday Episode Teasers: Agent Machado’s past with Shaylene is revealed. Siobhan deceives Malcolm when she pretends to be Bridget. Tyler takes a key piece of evidence in Siobhan's revenge plot. Henry has to keep Bridget from interfering in his plans.

Once Upon A Time: We reported earlier this month about the secrecy surrounding Sebastian Stan's new role on the series. Soaps.com has now learned that he'll appear in an episode this spring as Mad Hatter.

Pretty Little Liars: The Season 2 finale, "unmAsked," is right around the corner and will air on Monday March 19. 'A' will finally be revealed at the Rosewood Junior League’s Masquerade Gala.

The Selection: Based on the upcoming series of books by Kiera Cass, Aimee Teegarden ("Friday Night Lights," "90210") has been cast in a leading role in the new CW pilot, which is set 300 years into the future and described as an epic romance.

The Lying Game: Fans can look forward to an explosive season finale on March 5 on ABC Family at 9:00 PM, which stars former "As The World Turns" star Alexandra Chando. Monday Episode Teasers: An unexpected engagement and quickly-planned wedding causes many to suspect that something isn't quite right. While Ethan makes a discovery that changes the game, Sutton urges Emma to tell Kristin what they found in Rebecca's house. In the end, a shocking revelation leads to major repercussions in the Mercer household.

The New Normal: "The Hangover" star Justin Bartha (Doug) will play Rannells' other half in the new single camera NBC series. The show surrounds a gay couple and the surrogate picked out to help them have a baby of their own.

The Secret Circle: An episode of "Supernatural" will air in the Chance Harbor series' place titled "Death's Door."

The Vampire Diaries: It's another repeat for next Thursday. For those who can't get enough and want to watch an encore, March 8 brings Alaric and Elena disturbing news about a weapon used in a recent murder. Damon and Stefan continue their quest to kill Klaus, who hosts a dinner party.

Touch: FOX has moved around the premiere for its freshman series. Tune in Thursday March 22 at 9:00 PM.

True Blood: Alan Ball is stepping down as head writer of the vamp series. Though his replacement hasn't been named, look for a new writer to lead the characters into the next season.

Join us on Twitter @soapoperafan, and Facebook. Come tweet and Facebook with us Primetime shows, about all the other soap operas, "Glee," "Grey’s Anatomy," "Vampire Diaries" and "Venice The Series!"
Header Photo Credit: The Lying Game (ABC Family)