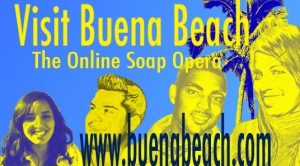 In the age of the Internet, soap fans are getting way more than their daily soap fixes from just television these days – and now we’re about to introduce yet another!

Last May, Long Beach, California resident Diane Brown started her very own online urban Internet soap opera titled Buena Beach, which features readable episodes surrounding the tales of characters who live and work in the fictitious town of Buena Beach. Originally starting this project as a creative way for her to showcase her writing, not only does Diane offer her readers these short snappy recap episodes, she’s also included character bios, recipes, movie reviews, and tons of other character driven components.

Although Diane initially wanted to film her episodes, and have them uploaded to the site for all to watch, a hectic schedule called life just didn’t leave room for that type of project. For those wondering if Diane made up her characters by herself, we can tell you that she used her friends, with their permission of course, as the basis for each fictional part of the cast.

With seasons one and two of Buena Beach currently making headway throughout the cyber world, the online soap has quickly gained a fan base, and Diane already has ideas for what she’d like to add to her website for its fans in the future, including fun interactive features like contests and reader comment sections.

Soaps.com wants to congratulate Diane on introducing her writings to the world through such an inventive avenue! We wish you the very best and can’t wait to see what new scandals unfold in Buena Beach! To become a part of the fun, please visit Buena Beach today!