As The Corn Grows! 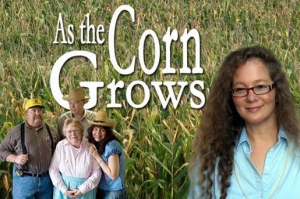 Okay, so maybe you thought we meant to say As the World Turns, or that we just had corn on the mind after attending a weekend corn roast. However, our title contains no typos!

As The Corn Grows is in fact a new online soap opera that airs in thirty-five communities in and around southern Minnesota. Televised on Our Story TV, the soap is filmed at Heritage Acers and Our Story Studios in Fairmont Minnesota and surrounds the life of a big city girl named Kati who gives up the fast lane to relocate to southern Minnesota. Produced by Jeff Rouse, fans will watch the comic changes and growth in cast after Kati inherits her Aunt Ella’s farm with each new episode!

To catch your first glimpse of Episode one and two, and to meet the characters involved, including Aunt Ella, Kati, Mrs. Swanson, Cousin John, Prairie Ann and Elmer Plow, please visit Our Story TV.

Soaps.com wants to wish everyone involved much fun and success with this comical new online soap!