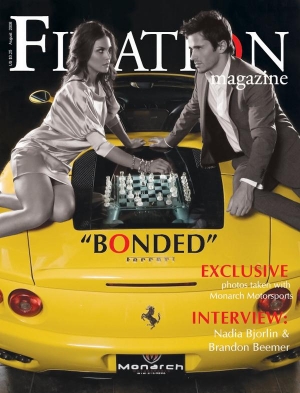 Although The Bold and the Beautiful actor Brandon Beemer had to say goodbye to many of his Days of Our Lives co-workers when he left the show in February 2008 as Shawn Douglas Brady to join CBS’ B&B as Owen Knight in July of 2008, one person he refused to say goodbye to is his off-screen, real-life girlfriend, Days actress Nadia Björlin (Chloe).

The two have been dating since before last year’s Soap Cruise and now both are featured in the August 2008 issue of Fixation Magazine, a monthly lifestyle magazine, which focuses on San Fernando Valley, California’s fashion, events, beauty and all around social scene!

Brandon and Nadia steam up the pages with different photo takes of them in true James Bond attire and surroundings! The August issue also features an interview with the actors.

Soaps.com wants to congratulate Brandon and Nadia on this recognition in Fixation! The pics are totally hot!

For those of you who missed Soaps.com’s July interview with Brandon you can read it here!