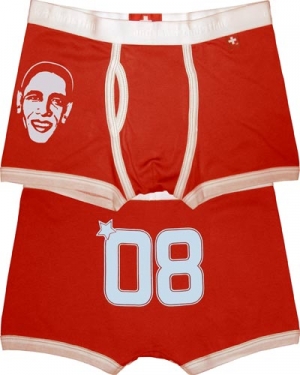 On this Friday, August 15, 2008, soap stars will pull together to show their support for presidential nominee Barack Obama!

After underwear designer Andrew Christian unveiled his new collection of Obama 08 briefs, Bridge and Tunnel Communications made plans to produce a special photo shoot – Daytime for Obama! Yes, you heard it right, some of your favorite, sexiest daytime stars will pose in these undergarments for the shoot! While the men will go shirtless, the woman will adorn camisoles to go along with their democratic briefs!

Although all of the actors who will take part in the campaign to support Barack Obama have yet to be announced, those who are already on schedule to appear in their skivvies will be Days of Our Lives’ Kristen Renton (Morgan) and Blake Berris (Nick), The Bold and the Beautiful’s Heather Tom (Katie), Lesli Kay (Felicia), Ashley Jones (Bridget) and Winsor Harmon (Thorne) and The Young and the Restless’ Vail Bloom (Heather), Christel Khalil (Lily) and Melody Thomas Scott (Nikki)! As we said, we’ll keep you updated should there be any other stars added to the list!

Soaps.com can’t wait to see these finished shots! Can you say, “Hot!”