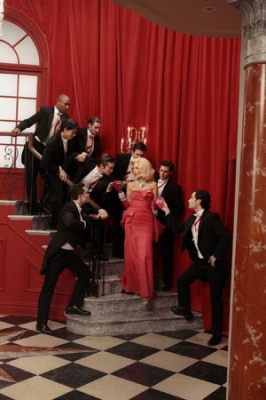 Have you fallen behind on the latest in Primetime? Soaps.com is here to bring readers up to speed through our weekly Primetime Dish column. Here are just a few of the things to look forward to during the week of January 30, which include casting scoops, new season premiere info and which of your Daytime favorite soap opera actors are making the after-dark crossover…

90210: Arielle Kebbel (ex-Lexi, The Vampire Diaries) returns to guest star. Tuesday Episode Teasers: Adrianna and Silver try to put the past aside, Annie’s work as an escort is at risk of being exposed, and The All-American Rejects perform at Liam’s Bar’s re-launch party.

CSI: Crime Scene Investigation: If you’re already missing Marg Helgenberger, who ended her twelve year run as Catherine Willows on Wednesday January 25, the actress hasn’t ruled out a return appearance or two. Until then, Marg plans to relax, spend time hiking with her dog and would love to do Broadway.

CSI: Miami: More details on Raquel Welch’s (“8 Simple Rules,” “American Family,” “Spin City”) upcoming role… Beautiful and sexy, this vixen will start a domino effect that will result in the beginning of the end of one group of crime-solvers. Look for Raquel to appear later this winter on CBS, Sundays at 10.00 PM.

Defiance: The Syfy channel is cooking up a new paranormal series where people and aliens live on one planet. So far we know that “True Blood” alum Grant Bowler (Cooter) has been cast in the lead role. Production for “Defiance” will start in April in Toronto.

Desperate Housewives: If you’re not aware, the series will end its eight year run on ABC in May.

Dirty Soap: It looks as though we won’t be seeing anymore soap opera stars on the E! Network series. Jenna Gering, wife of “Days of our Lives'” Galen Gering (Rafe) tweeted, “So the word is that Dirty Soap is not being picked up for another season. Thanks to all of you who watched. You all have been so supportive!”

Downwardly Mobile: NBC just picked up the latest Roseanne Barr pilot. As co-writer of the script, Roseanne will play a mobile home park owner and den mother to its residents.

Gossip Girl: Look for the drama to open this week with a musical dream sequence featuring all of the men in Serena and Blair’s lives. If that’s not enough to entice you for the show’s 100th episode, here are some more Monday Episode Teasers: While Chuck has a hard time facing the reality that Blair is ready to walk down the aisle with Prince Louis, Georgina Sparks’ (guest star Michelle Trachtenberg, “Weeds,” “Love Bites”) return could make the royal affair a royal disaster.

Hart Of Dixie: Kaitlyn Black (“Raising Hope,” “Cold Case”) will guest star again as Annabeth. Monday Episode Teasers: Annabeth doesn’t want Lemon to find out who her new friend is, and Lemon has a few obstacles to overcome while campaigning to become the Belles’ new Memory Matron.

Hot In Cleveland: Former “All My Children” star Susan Lucci (ex-Erica) guest stars on Wednesday February 1. Tune in to TV Land at 10.00 PM.

Nikita: The CW series has a very large cast but not for long… Look for a handful of characters to disappear in the coming weeks. Some will be killed off, others will simply go away. On the other side of the coin, Alex’s estranged mother, Katya, will be making her way back, so keep an eye out for Sarah Clarke’s (“Twilight Saga,” “Trust Me,” “24” ) return. “Nikita” airs Fridays at 8.00 PM.

Pretty Little Liars: We hear Natalie Hall ("All My Children," "The Good Wife"), who plays Kate, will back in the fold in Monday's episode "A Kiss Before Lying."

Private Practice: "The Bold And The Beautiful's" Ashley Jones (Bridget) began taping for a guest arc last week. Look for her in ABC's line-up soon, Thursdays at 10.00 PM.

Save Me: Not only will Anne Heche ("Hung," "Cedars Rapids," "Men In Trees") be producing the spiritual NBC comedy pilot, which is heading into production, she'll be starring in it as well. Look for her character to believe she's channeling God after suffering an accident.

Smash: NBC's new musical series, featuring Anjelica Huston ("When In Rome," "Medium," "Huff") as Eileen Rand, will premiere on February 6. While the cast prepares for the Broadway musical, based on the life of Marilyn Monroe, former "All My Children" actor Thorsten Kaye (ex-Zach) will arrive on the scene in the recurring role of Eileen's lover starting in the seventh episode in March. Will Chance, Llanview's ex-Dr. Jason Nance, ("Melissa & Joey," "One Life To Live," "The Bounty Hunter") will appear as well.

Spartacus: Vengeance: Season Two, the follow-up of "Spartacus: Blood and Sand," returns on Starz this Friday January 27 at 10.00 PM. Keep in mind, Liam McIntyre ("Rush," Neighbours) was recast as Spartacus, previously played by Andy Whitfield, who sadly passed away from cancer at 39 last year.

Supernatural: "The Vampire Diaries" Sara Canning (ex-Jenna) guest stars as Lydia, who strikes up a conversation with Dean at the local bar and ends up bringing him back to her place.

The Finder: George Stults, real-life brother of the show's star Geoff Stults (Walter) will guest as Langston Sherman - Walter's brother. Look for the musician to arrive in town sometime in March to report to Walter that their father is dying and wants to see their estranged mother one more time. Did we mention the show was up 29% in adults 18 - 49 from the previous week's series debut? "The Finder" airs on FOX on Thursdays at 9.00 PM.

The Good Wife: Fans of "Dexter's" Rudy Cooper, get ready to see a familiar face on the CBS series. Christian Camargo ("Twilight Saga: Breaking Dawn Part One and Two") will turn up sometime in March as a filmmaker, whose suicide documentary is linked to a young girl's death.

The Secret Circle: Alexia Fast ("Flashpoint," "Supernatural") has been cast as Eva, who is currently in a drug-induced coma. She'll appear as Lee LaBeque’s ex-girlfriend later this season in the episode titled "Return."

Touch: Soaps.com was in on a conference call this week, Kiefer Sutherland talked about what made him decide to return to FOX and star in their new suspense series, after his nine year run on "24." "Well, it was a combination of things. I had an unbelievable experience on "24." We shot 198 episodes and I was as excited about shooting the 198th as I was the first. So that experience, and I had a great relationship with Fox, both the studio and the network. And so that combined with this script, it wasn’t even really a choice anymore. It was something that I knew I had to do."

Treme: If you're wondering when season three will return to HBO, there's going to be a bit of a wait. The New Orleans drama will not resume until sometime this fall.

True Blood: There's a new vampire coming to town in season five. Christopher Heyerdahl, who plays ancient vampire Marcus in the "Twilight Saga," will recur in the role of Dieter Braun, another old vamp.