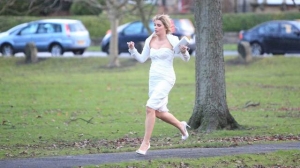 Americans aren’t the only ones with good soapy drama. Soaps.com has listened to our readers from across the pond who’ve written in to request we keep tabs on a few British and Australian soap operas. Take a look at what’s to come on dramas from other parts of the world.

Hollyoaks:
Emmett Scanlan, “Hollyoaks'” Brendan Brady, has been nominated for the Rising Star prize at the 2012 Irish Film & Television Awards for his role in the movie “Charlie Casanova.” The film is about a ruling class sociopath who uses a deck of cards to determine his fate and kills a working class girl in a hit and run. The awards will be handed out on February 11.

Teaser alert: Daryl Fishwick will return to “Hollyoaks” as Nancy’s mother Margaret in February. The character hasn’t been seen since 2007, but will be back to possibly throw a kink in Darren’s surprise wedding for Nancy.

Emmerdale:
Danny Miller is exiting the British soap this spring after three years of playing Aaron Livesy. However, the details of his character’s departure are still unknown, even to the actor.

Teaser alert: Look for Charity and Jai’s wedding to kick off this week. However, Charity gets shocking news about her daughter forcing her to run to the rescue on her big day. Find out if she makes it to the church on time on January 26.

Neighbours:
Toadie’s home of the past decade is getting a makeover on “Neighbours.” The new set, which will see brighter pastels replacing dark plaids, will be revealed in March.

Teaser alert: Jordy Lucas, who recently signed on for two more years with the soap, previewed what's to come on Ramsay Street for Summer with Digital Spy. It seems with her leaving school, Summer will pursue her journalism dreams, while scandal surrounds Paul Robinson and the newspaper. Also, look for trouble with Karl and Susan to affect Summer, while guilt consumes her over cheating on her exam. In addition, she will deal with her and Andrew's upcoming break up.

Home and Away:
Esther Anderson, who filmed her final scenes as Charlie on "Home and Away" in August, will say her goodbyes to Summer Bay on air in Australia this week. The actress is now focusing on launching an acting career in Hollywood.

Teaser alert: Meanwhile, Lynne McGranger's Irene has a heavy storyline coming up. After battling breast cancer and facing a heart scare, the character will hit rock bottom after holing herself up in her house and shutting herself off from the world. The storyline will kick off next month.

Coronation Street:
Antony Cotton will be seen as Sean Tully again in about six weeks. Cotton told Digital Spy his character will be in for a surprise when he finds Paul the fireman and his wife Lesley living in his house.

Monday teaser alert: As Sean is set to make his return, Katherine Kelly's Becky McDonald will make her exit on January 23. It seems despite crashing her ex-husband Steve's wedding to her nemesis Tracy, she is redeemed regarding Tracy's miscarriage. However, her exit story might not turn out as expected.

EastEnders:
Mandy's mother Lorraine will return to Albert Square in February. "Bad Girls" star Victoria Alcock has been cast in the role.

Teaser alert: Cheryl Fergison is leaving "EastEnders" as Heather after four years in the role. According to The Sun, the character will exit the show early this year after getting killed by Ben. It seems she's offed after a fight with the troubled teen and his dad Phil tries to destroy the evidence. This will kick off a new storyline between Phil and his girlfriend Shirley, when she suspects his involvement in her friend's death. Before Heather's murder, however, her life will reportedly take on various twists and turns involving several characters, including Andrew Cotton, who proposes to her and later becomes a suspect in her death.