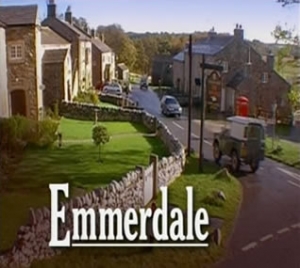 Americans aren’t the only ones with good soapy drama. Soaps.com has listened to our readers from across the pond who’ve written in to request we keep tabs on a few British and Australian soap operas. Take a look at what’s to come on a few dramas from other parts of the world.

This week on Emmerdale, a British soap centering around a family farm and surrounding villages, Eric and Amy are confused by Val’s happy disposition as the adoption nears, Rodney is questioned by the police, Bob worries about Hazel moving away, Lisa throws Zak a 60th birthday party (that he might not like) and Gennie asks Nikhi to move in with her.

In casting news, look for Sophie Powles to exit the role of Holly Barton this summer. Also, keep an eye out for “Emmerdale’s” Matthew Wolfenden (David), who is currently competing on the British reality TV show “Dancing on Ice.”

Coming up on Neighbours, an Australian soap opera focusing on inter-generational stories of family, romance and domestic issues on Ramsay Street, Sophie will go through a rebellious phase when she meets her new love interest, the mysterious Corey, played by newcomer Toby Wallace. Also, Rhys tries to romantically distract a new surgical intern, played by Elise Jansen, so she’ll get kicked out of Erinsborough Hospital’s surgery program and he can take her place.

Get to know Gemma Pranita, who plays Jade Mitchell, by reading a recent Neighbours interview. When asked what her greatest extravagance was, she replied, “Flowers. Before I joined ‘Neighbours,’ I was working in a bar, living dollar to dollar. When I first started getting a regular salary, I decided that every week I was going to have fresh flowers in my home. There is a beautiful florist up the road and they’re bloody expensive but they last the whole week and I love walking in, and there they are.”

Home and Away, an Australian soap following the personal lives of those living in the fictional coastal town Summer Bay, returns in the UK on January 16 and in Australia on January 23. When it picks up after the shocking cliffhanger, Charlie clings to life after getting shot by Jake when she tried to leave town with Brax. Ruby blames a distraught Brax for it all, but it remains to be see if Charlie will live or die considering the rumors actress Esther Anderson has quit the show.

Tessa James, who played Nicole Franklin on Home and Away, married NRL (National Rugby League) star Nate Myles in Melbourne just before Christmas. Australian Yahoo! TV reports James as saying of her last-minute nerves on the big day, "My moment of freak out was when I drove in and saw everybody. But then I saw Nate. That's all I wanted to do all day and when I did, I thought it was all going to be OK."

American actor Robert Vaughan joins Coronation Street, a British soap telling the stories of "ordinary" folks living in the fictional town of Weatherfield, as the wealthy Milton, who Sylvia takes a shine too him after meeting him on a cruise. She worries when she doesn’t hear from him upon her return home, but he surprises her by showing up at the pub.

Tonight on EastEnders, a British soap opera about the families and relationships set in the fictional Victorian square Albert Square, Lucy is back to her conniving ways and sets her sights on Mandy, when the latter interrupts the former's time with her dad Ian. Next week, Lauren announces she's quitting school. So, in an attempt to teach her a lesson, Tanya and Max tell her she'll have to work at the salon.

* Lauren's portrayer, Jacqueline Jossa, is up for a Best Newcomer award at the National Television Awards to be presented on January 25.

Airing on January 24 and 26, Hollyoaks, a British soap opera centered around Hollyoaks Community College, will find Darren organizing a surprise wedding for Nancy and enlists the help of ex-girlfriend Cindy. It's probably never a good idea to involve an ex in a current relationship, but things might get worse for Darren when he's tempted to gamble again.