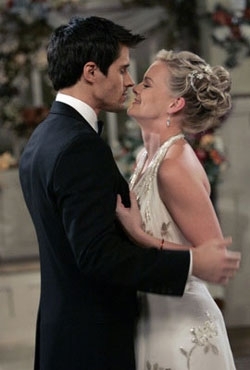 Soaps.com: We know it’s frustrating, Keta, but we’re not really sure why they don’t have this option (yet?). We hope they’ll bring their fans online viewing one day soon, but know that it’s not as easy as some may think. Stay tuned to our Latest News Room as we’ll report any changes to ABC’s programming should they come to light!

Aliza C. asks: After 30 years of watching “As The World Turns” and enjoying every minute of it, I would like to know why you are canceling the show?

Soaps.com: We’re not sure where you heard this rumor, but we are happy to report that the show is definitely not being canceled and still airs on CBS daily! Hope that makes your day!

Tammy H. asks: Why don’t we ever hear of Thorne’s daughter anymore (Ally), and what ever happened to Felicia’s son? Has B&B just forgotten about them?

Soaps.com: Although we haven’t seen some of the younger kids on B&B as of late, we assume the show will bring them back should the storyline call for them. We miss those little cuties as well! You see, there are contract players and recurring characters and the latter are only used sporadically – as storyline permits. Though we’re sure the show hasn’t forgotten, at this point the show is only a half hour and with the current storylines, we assume it’s just not in the cards right now, for the children to be seen. Sometimes the shows SORAS (Soap Opera Rapid Aging Syndrome) (age) the characters – perhaps we’ll see them in the form of teenagers at some point!

Ryen W. asks: I am a huge fan first off… I am 23 and have been watching Days for as long as I can remember. But one question – when is Belle and Shawn coming back? Soon? Or never again… just been wondering. I would love to hear back from you.

Soaps.com: The show hasn’t given any inclination that they will be bringing Belle and Shawn back anytime soon. A trip around the world, we think should take a year in soap time, but this does not mean that in a year, the show will have a storyline created for their return. There is room for their return, luckily. If you’re not already aware, Brandon Beemer (ex-Shawn) now plays Owen on Bold and the Beautiful. Please stay tuned to our Days Comings and Goings page for all the latest in casting news. If they do return, that’s where you’ll see it posted!

Margaret H. asks: I started a new job and have not had a chance to catch up. I know Michael is in a coma. Is his character permanently gone? What is the actor doing now?

Soaps.com: Congrats on the new job! Many fans are begging for Michael's return! Although the show hasn't made any statements as to if or when they'll bring back Dylan Joseph Cash as Michael, right now they seem to be content having him in a coma. We do know that he'll be appearing in the 2008 movie Opposite Day as Chaz.

LouElla M. asks: Please refresh my memory as to when Beth died in the 80's, and how did she come back on the show? I have not watched the show for long periods of time. I did watch it years ago and am familiar with the characters.

Soaps.com: Our Guiding Light writer, Matthew Purvis, has opened our soap time vault and found out that Beth has come back twice. Supposedly she had been killed by Dr. Blackburn but she actually killed him. She came back with amnesia and Blake tried to keep her in mental institutions so she couldn't reunite with Phillip. The second time she was thought dead after a plane crash and returned with amnesia and a new identity. Hope you're enjoying the new storylines!

Mary C. asks: What year did One Life to Live first air and did Denise Alexander play in it?

Soaps.com: One Life to Live first aired on July 15, 1968. Though Denise has played on several soaps, she did not appear on the soap.

Monica S. asks: Is Passions not going to be on Direct TV anymore after August 11th? I am a huge fan! It is the most entertaining soap I have ever watched.

Soaps.com: Unfortunately Monica, Passions will end for good on August 6, 2008, as they finished taping last March. We hear they'll be playing old episodes on the Canadian Superchannel on Rogers. For those who aren't in Canada, they can still hang around the Soaps.com site on the message boards.

C. R. asks: Daniel Romalotti's Tattoo on his back? What is it and what does it spell out?

Soaps.com: Although we don't know anything about Micheal's (Daniel) back tattoo, we do know that he has a tattoo on his wrist that says "Silvio" - to honor his father.