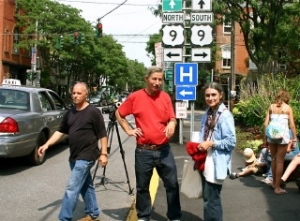 When the name Sam Hall is mentioned, those in the entertainment industry remember Sam from his work as a writer on such soaps as One Life to Live, Dark Shadows and Santa Barbara. Now, Sam is knee-deep into a new project – one that has his town of Rhinebeck talking soaps!

Back in 1979, Sam and his wife Grayson, who also worked with him on One Life to Live and Dark Shadows, bought a house in Rhinebeck, New York where they commuted back and forth for a little over ten years until the couple settled there in 1990. Not only has Sam made this town his home, he’s now bringing the community its very own soap opera, which will be full of humor and based on the daily comings and goings throughout Rhinebeck!

Sam presented his soap, “So You Want to Live in the Country,” to the president of a local cable access channel, Kathy Hammer, with the hopes to feature everything ‘local’! After securing a $10,000 grant from the Dutchess County Arts Council, Sam quickly started getting his project material together and now has enough to already include four episodes!

Produced by Aida Wilder, and directed by Wally Carbone, the entire crew is comprised of all local residents with the soap’s script set to a lot of Sam’s personal experiences. Many of the local merchants have helped out as well with donations of food, clothing and accessories to be used in and supplied during production of the hometown soap opera.

“So You Want to Live in the Country” will appear on PANDA, channel 23, with hopes of expanding to other public access channels throughout the Hudson Valley area!

Soaps.com wants to wish Sam, his cast and crew the best of luck with this exciting new venture! Anytime someone brings their expertise into a community who pulls together as one only good things are bound to happen!

As The Square Turns?