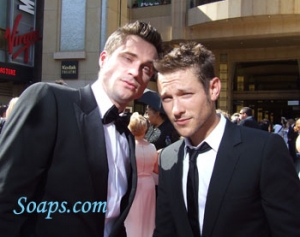 Given the amount of mixed feelings toward this year’s 35th Annual Daytime Emmy Awards show, we wanted to see how each of our readers’ thoughts fell into some of the most talked about issues surrounding the event.

Last Thursday, June 26, 2008, we gave everyone the opportunity to vote in our latest survey, The 35th Daytime Emmys Best and Worst! As the Emmys are slowly winding down, we are happy to bring you the results, and with any luck, maybe we’ll see some big changes to reflect your comments in 2009’s show next year!

Most said: Definitely watched!
Runner-up: Darn it, I missed it!

Did you keep up with the live blogging on Soaps.com?

Most said: No, didn’t know you had it.
Runner-up: No, because I was watching the show.

What’s your favorite part of the Emmys?

Most said: Seeing who won the best daytime drama!
Runner-up: Watching the presenters!

Did you attend the Daytime Emmys this year?

Compared to past Emmy Award Shows, this year’s was…

Most said: I was disappointed but still watched.
Runner-up: The show seemed shorter.

What are your thoughts on the Daytime Emmy nominations and winners process?

Most said: They’ve got their good and bad points.
Runner-up: They need a lot of work in order to be true to the nominees and winners.

Where do you want the Daytime Emmys to be held next year?

Will you attend the Daytime Emmys next year?

Most said: No!
Runner-up: Not sure…

Soaps.com wants to thank all of our readers for participating in our Emmy survey and for staying tuned to Soaps.com through all of the highlights surrounding daytime’s hottest event! We look forward to bringing you all of the daily updates, latest news, spoilers and casting changes leading up to next year’s show! And, of course, don’t forget to continue having fun and meeting new soap friends in our message boards!