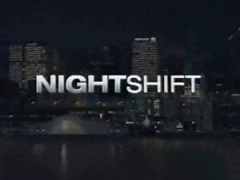 We teased you about what was to happen on GH Night Shift Premiere episode. Now we’ve got more scoop for you, already, on episode 2. The show, aptly named, “Crash”, is full of chaos and mayhem when the a car crashes through the ER, injuring a pregnant Dr. Robin Scorpio (Kimberly McCullough), and killing a member of the staff.

Elsewhere, Jagger Cates (Antonio Sabato, Jr.) returns to town after a 13 year absence, with a surprise for Robin.

Meanwhile, sparks fly between Touissant (Billy Dee Williams) and Epiphany (Sonya Eddy) after he returns to the hospital from being on tour with his musical group The Saints.

In another corridor of the hospital, new interns Kyle (Adam Grimes) and Claire (Carrie Southworth) bond over their fear of their strict superiors,

Don’t forget to watch “General Hospital: Night Shift,” Tuesday July 22 at 11 PM ET/PT on SOAPnet, and catch up with Soaps.com for updates!