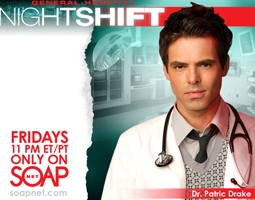 Soaps.com recently announced the cast of General Hospital: Night Shift. GH fans are thrilled the show is returning for a second season on SOAPnet and we’ve more news for you.

Jagger will return to Port Charles after a 13 year absence with his five-year-old son, Stone. Watch for Jagger to reconnect with Robin (Kimberly McCullough), meet some new residents – including Robin’s boyfriend Patrick (Jason Thompson) – along the way and, most importantly, he will face a difficult internal struggle as he grows emotionally as a man and a father. As for Scorpio, the super spy will have to face the fact that he is getting older and his health is failing. Upon his arrival in town, he’ll check into the hospital as a patient where his daughter, Robin, will be providing his care. Father and daughter will struggle to figure out their relationship as grown adults.

Brian Frons, president of Daytime, Disney ABC Television group said, “It is very exciting to kick off the second season with casting two accomplished actors who will undoubtedly bring their A-game to the series, because of their own histories with the original top-rated show, the audience will be able to immediately connect with them and their characters’ upcoming storylines.”