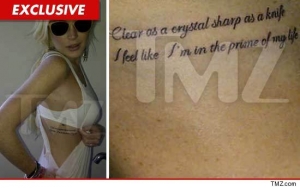 Before many knew who actress Lindsay Lohan was she broke out with her first acting gig as “Another World’s” Alexandra ‘Alli’ Fowler, a role she played from 1996 to 1997. She took some time away from her new film “Underground Comedy” (Marilyn) to get new ink.

TMZ is reporting that Lindsay hit up her favorite tattoo shop in L.A., Shamrock Tattoos, and now has the lyrics from a Billy Joel song, “I Go To Extremes,” tattooed across her rib cage, which reads, “Clear as a crystal, sharp as a knife I feel like I’m in the prime of my life.” Apparently the words inspired her and signifies everything she’s gone through and where she is today.

Do you have a tattoo? Tell Soaps.com about them below!

Find out what a “Glee” actress had to say about Lindsay through Glee’s Dianna Agron Talks Lindsay Lohan In Cosmopolitan.

Video: The Bay: Confessions Of Bay...