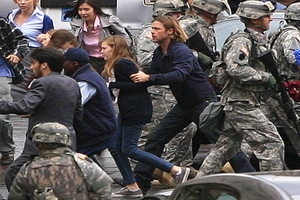 The Scottish Sun is reporting that during filming of the new sci-fi thriller, “World War Z,” former “Another World” actor Brad Pitt (ex-Chris) rescued an extra from being trampled. During the scene where Brad plays Gerry Lane 700 extras rushed through George Square in Glasgow, Scotland. One woman fell, and that’s all it took for Brad to stop, bring the woman to her feet and prevent what could have been a very bad outcome.

Aside from “World War Z” Brad is currently working on “Voyage of Time” as the narrative voice, “Cogan’s Trade” as Jackie Cogan, “Happy Feet 2” in 3D as the voice of Krill, and “Moneyball” as Billy Beane.

If you want to be the new owner of a Malibu bachelor pad check out Brad Pitt Sells Malibu Bachelor Pad.

Starz Programming Chief on ‘Outlander’ Spin-off, If More ‘Party Down’ Is Possible and Which ‘Power’ Show Won’t Move Forward