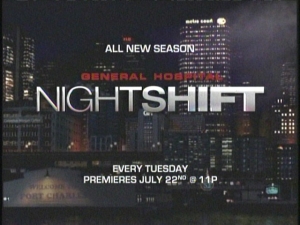 We are all anxiously awaiting the new season of Night Shift and all its characters are going to bring to the canvas this year. However, Soaps.com has just learned that the show plans to bring a gay character on the scene through the sexy intern Kyle Julian (Adam Grimes)! Though we don’t know what storyline is planned for the younger brother of Dr. Leo Julian (Ethan Rains), the character of Kyle will be one to watch this season!

Stay tuned to Soaps.com as we’ll bring you the latest Night Shift developments! We look forward to the new season ahead!

We’ve received many emails from anxious fans wondering when season two of the SoapNet hit and General Hospital spin-off Night Shift will return to air. Starting in July 2008, the series will air every Tuesday night at 11:00 PM!

What can you expect season two to deliver? Of course you’ll see your favorites from the first season but you can bet some new faces will light up the screen as well – including some veterans from days gone by! Will the storylines of the daytime hit and its primetime spin-off match? Yes! Not only will they coincide, but the show is happy to announce some new additions to the primetime writing crew. Head Writer Sri Rao (What Goes On: MTV Networks and Precipice: off-Broadway play) and Executive Producer Lisa De Cazotte (former Executive Producer of Passions, Producer for AMC, OLTL and Sunset Beach, as well as coordinating producer on Santa Barbara will join the crew as well.

Although Jill Farren Phelps and Bob Guza Jr. led the team during its successful first season, their schedules will only allow them to focus on their current daytime jobs at GH. However, we have all the faith in the world that the show will continue with last season’s rankings as SoapNet’s most watched series of all time!

Soaps.com can’t wait for Season two of General Hospital: Night Shift to air! For those who want to rehash Season One you can do so in our July 2007 Latest News section!

Soaps.com Survey: What Our Readers...

ABC Spices Up Its Soaps!