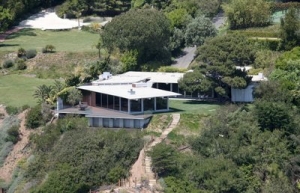 After splitting from Jennifer Aniston, daughter of “Days of our Lives'” John Aniston (Victor), Brad Pitt purchased an $8 million dollar bachelor pad. That was in 2005 before he decided to take another shot at love with Angelina Jolie. Anyone out there happen to have $13.75 million lying around? If so, Brad’s beachfront bungalow in Malibu, which includes a lap-pool, a tennis court, and Cindy Crawford and Leo DiCaprio as neighbors, is now on the market.

One of Brad’s first acting gigs was in 1987 as Chris on “Another World.” As fans know, he went on to become one of Hollywood’s biggest stars. Some of his most memorable roles were on “Thelma & Louise,” “A River Runs Through it,” “Se7en,” “Legends Of The Fall,” “Troy,” and alongside Angelia in “Mr. & Mrs. Smith.”