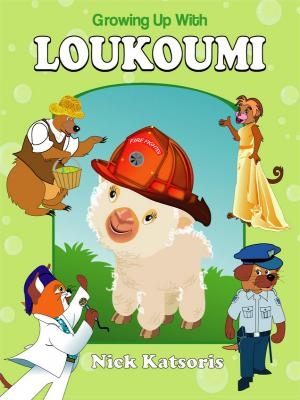 Last year we told you about the children’s book Growing Up With Loukoumi and the celebrity narrated CD of the book featuring soap stars like Guiding Light‘s Frank Dicopoulos and The Bold and theBeautiful‘s Constantine Mouralis. The book teaches children that, if they work hard and believe in themselves, they can be anything.

Seeking to spread the message further, the book’s author, Nick Katsoris, launched a national contest, Growing up with Loukoumi Dream Day, which offered kids a chance to win a day in their dream career. Over 200 events were held nationwide at schools, libraries and bookstores, allowing thousands of children to enter the contest. Now three lucky children have earned their rewards: One will visit NASA to witness a Mars landing; another will play soccer with the New York Red Bulls at Giants Stadium; and the third will meet a television chef.

Sophie Saidmehr, a 9 year old from Long Island, dreams of being a Mars Rover Engineer. She will be visiting Pasadena, CA on Memorial Day weekend where she will go to the NASA Jet Propulsion lab to watch as the Phoenix lands on Mars on May 25th. In addition to spending time with an actual Mars Rover engineer, she will be among the first people on earth to see the photos from Mars. The second winner, Lionel Li, an 8 year old from New York, dreamed of becoming a soccer player so he will be spending the day at Giant Stadium with the New York Red Bulls, attending practice and a game. The final winner was Nika Linn, from Fort Collins, Colorado. She dreamed of being a chef on a food television show and she’ll have the chance to cook on the air with acclaimed Chef Tony Tantillo from CBS Channel 2 News in New York. In addition to that, she’ll also have the chance to meet Rachel Ray on the set of her hit television show while she attends a live taping.