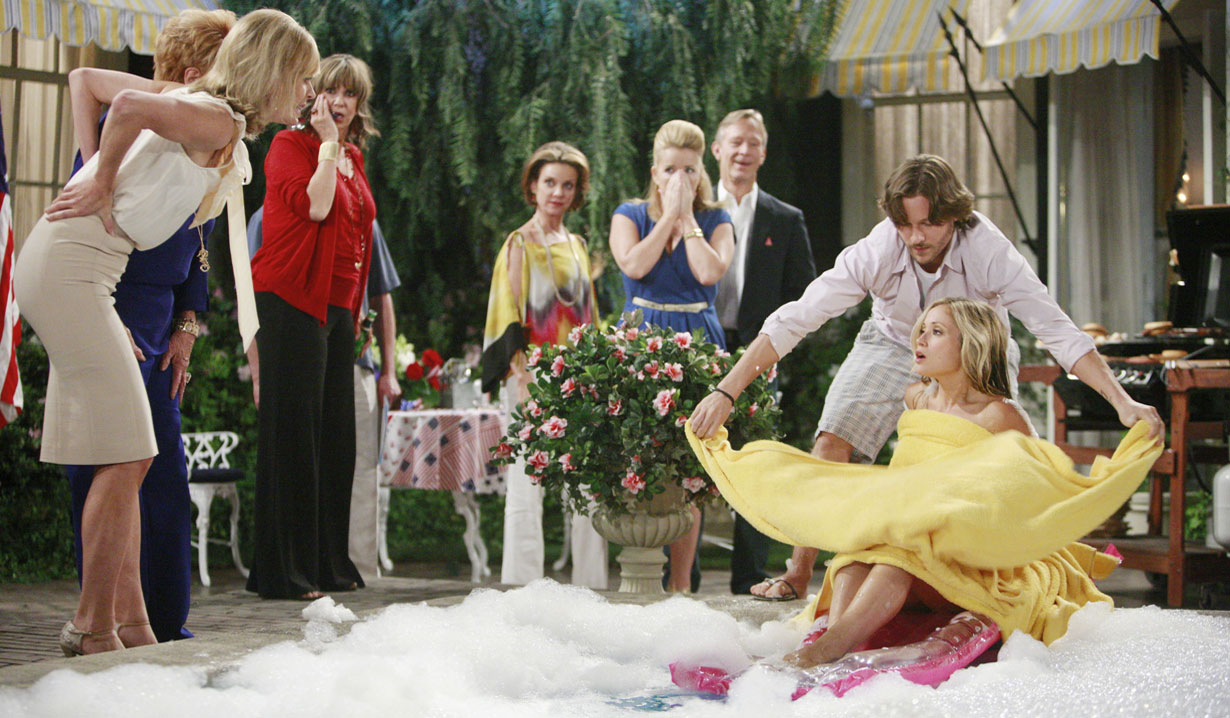 Over the years, soap opera characters have celebrated Independence Day by lighting fireworks, engaging in scandal, fantasy and heartbreak. Soaps.com takes a look back at some memorable Fourth of July celebrations on our beloved soaps…

During a holiday BBQ on One Life to Live, David Vickers, wearing a skimpy flag Speedo, tried to get Kelly Cramer to rub suntan lotion on him in front of her Aunt Dorian. Robert Ford showed up wearing the same patriotic Speedo as David and they celebrated by arguing over who filled the Speedo better! What can be more patriotic than that during a soap celebration?

On The Young and the Restless in 2008, Victor Newman caught his son Adam creating his own fireworks with Heather Stevens in the Newman Ranch pool and told him that she wasn’t welcome there. Jack and Sharon had an exclusive Fourth of July party for Restless Style at the Abbott mansion. Much to Sharon and Jack’s dismay, Gloria showed up with Jeffery Bardwell, announcing that they had eloped! Nick arrived at the mansion and confronted Jack about running the show at Restless Style. Meanwhile, Chloe Mitchell pretended to injure her foot to keep Cane Ashby’s attention while Amber Moore got drunk on shooters – a great prelude to any fireworks.

In July 2009 on Guiding Light, the Bauers and friends had their very last Fourth of July BBQ and what a heartwarming celebration it was. Characters got together to eat hot dogs, play Frisbee and croquet and really celebrated the stars and stripes. Reva Shayne and her father even sang the anthem and burst into tears. Rick Bauer also made a grand speech about how great it was to live in America and how happy he was with his family’s legacy. Can Independence Day get more heartwarming than that?

While passionately kissing in Angels Square on One Life to Live in 2008, Rex Balsom told Gigi Morasco that kissing her felt like the Fourth of July. Brody Lovett and Gigi’s son Shane arrived in their celebratory hats and broke up the fireworks between Rex and Gigi. While Shane showed his mom something on the side, Brody threatened Rex to leave Gigi alone so he could reunite his family. Meanwhile, a pregnant Starr Manning told Cole Thornhart that she would be giving her baby to the Michael and Marcie McBain, while Todd Manning accused Blair Cramer and John McBain of having an affair. Sex, scandal and forbidden love all on the Fourth of July.

Fireworks and fantasies seem to go hand in hand on our beloved soaps. On General Hospital in 2007, Stan Johnson imagined Lainey Winters seducing him on the Fourth of July. Meanwhile, Maxie Jones watched the fireworks with Barrett but fantasized about being with Logan Hayes instead, as Logan recalled their kiss elsewhere. On a rooftop, Patrick Drake got double the fireworks when Robin Scorpio arrived dressed in a white lab coat. There’s something about the holiday that gets the imagination going!

What better way is there to celebrate than to get into your birthday suit in a kiddy pool as Abby Newman did on The Young and the Restless at the Chancellor BBQ? While Abby tried to make a splash for her gig, “The Naked Heiress,” Jill Abbott stole her thunder and revealed to Lauren Fenmore and everyone that Neil Fenmore was Jill’s father too, making her a Fenmore! Two surprises in one night – who needs fireworks?

On As the World Turns in 2008, Janet Ciccone seduced Jack Snyder in her hotel room and they ended up creating their own fireworks. Mike Kasnoff and Vienna Hyatt celebrated Independence Day by dressing up as George and Martha Washington and making love – weird fantasy or plain patriotic? Meanwhile, Cyndi Lauper performed a Fourth of July concert in Oakdale where Noah Mayer and Luke Snyder finally embraced before their relationship got started. began to discover the ultimate root of the Brady-DiMera feud, all thanks to a few translated love letters that Lucas and Sami Horton had originally discovered. Doug and Julie Williams read the first two translated love letters between Colleen Brady and Santo DiMera (aka: Sami and EJ’s uncanny look-alikes). It was then that viewers finally learned this illicit love affair sparked one of the biggest familial feuds on daytime.

Fireworks with the Forresters

In 2008, while The Young and the Restless’ Ashley Abbott visited the Forresters on The Bold and the Beautiful, sparks flew – that is, sparks of jealousy. Even against Ridge Forrester’s warnings, Brooke Logan decided to show up to the Forrester BBQ, knowing that Ashley would be there. Brooke jealously watched them from a distance as Ridge and Ashley heated things up with their own fireworks.

Will the real Phillip Chancellor III please stand up?

Sparks erupted on The Young and the Restless at the annual Chancellor BBQ when Cane Ashby was finally forced to tell Jill Abbott, Lily Winters, Katherine Chancellor and Neil Winters that he was not Phillip Chancellor III after all. After everyone berated Cane for lying about his identity, the real Phillip appeared and took the blame, saying it was all his idea. Everyone was shocked to see him alive after his supposed death in 1989, but Phillip revealed that he’d been hiding in Australia the whole time. Who needs a fireworks display after that?