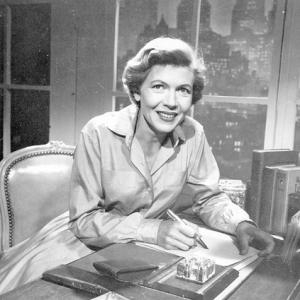 At the age of 89, on February 4, 2008, veteran soap actress Augusta Dabney passed away in her hometown of Dobbs Ferry, New York.

Born in Berkeley, California on October 23, 1918, Augusta’s impressive career in daytime consisted of Tracy Malone in “Young Dr. Malone” from 1959 to 1963, Laura Baxter on “Another World” from 1964 to 1965, Ann Holmes on As the World Turns off and on from 1966 to 1974, Barbara Norris on Guiding Light in 1970, Betty Kahlman Barry on “A World Apart” from 1970 to 1971, Carolyn Chandler Baldwin on General Hospital from 1975 to 1976 and Helena Ashley on One Life to Live in 1979. However, she’s most remembered for her role as Isabella Alden on “Loving,” which she played intermittently from 1983 to 1995. Some may even remember seeing Augusta appear in four of the daytime dramas with her second husband William Prince. Augusta’s career didn’t stop with daytime. In fact, the actress had numerous credits to her name in both primetime and film.

While Augusta is preceded in death by her husband William, she is survived by three children from her first marriage to actor Kevin McCarthy.

Soaps.com wants to send our deepest condolences to Augusta’s family. Your mother will be sadly missed by many in the entertainment world.