Top 10 Things You Shouldn’t Do This Valentine’s Day 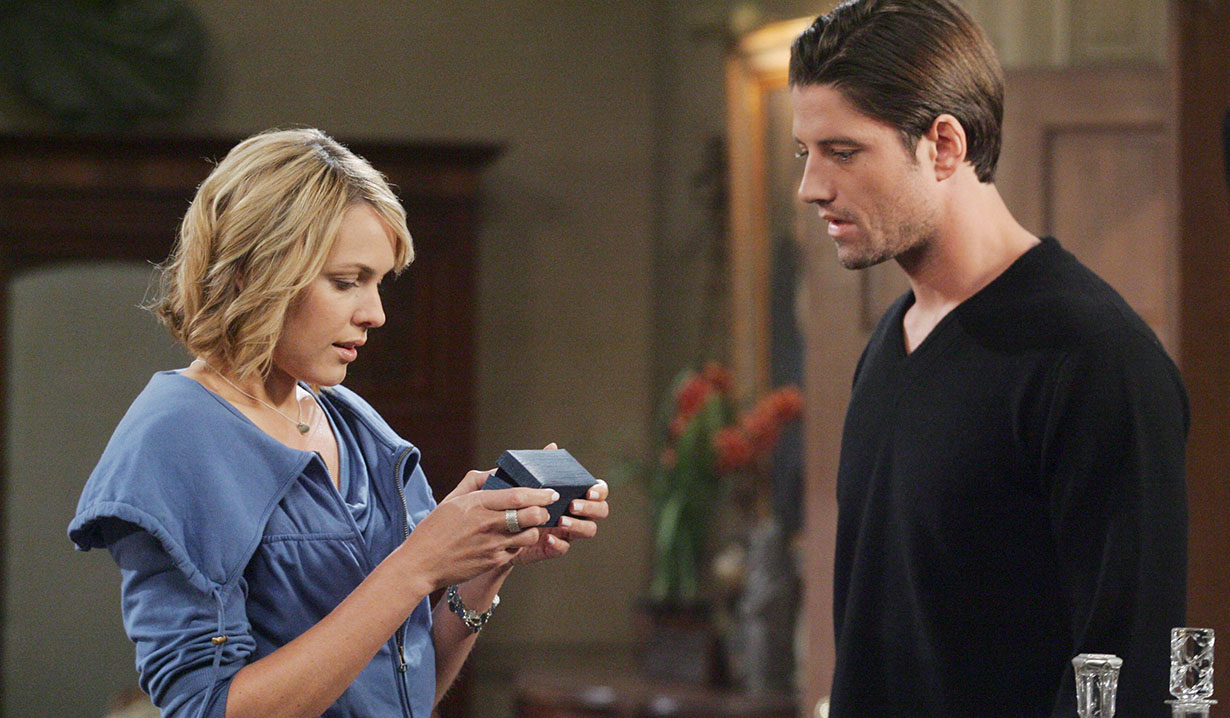 …Say it with flowers instead.

So you want to get your Valentine something special this year, but you’re not sure what exactly. Chocolate and roses? A spa package? A poem? Whatever you choose to do, you probably wouldn’t want to take your cue from our beloved soap opera characters this year. Here are the top ten things you should avoid giving your Valentine!

10. Give them surveillance jewelry:
After EJ asked Nicole to marry him on “Days of our Lives,” he presented her with a beautiful diamond bracelet. After Nicole happily put it on, EJ revealed that there was a tracking device inside – kind of like an ankle monitor but with some bling! Diamonds may be a girl’s best friend so opt for some jewelry with more bling and less stalker-ish devices. 9. Change paternity test results:
Probably not a good idea to switch paternity results and lie to your lover. This takes place on every soap. On “Days of Our Lives,” Sami Brady switched results countless times. When her grandmother Caroline switched Parker’s paternity results it blew up in everyone’s faces. On “The Bold And The Beautiful,” Amber tried to pass off Oliver’s baby as Liam’s. She and her mother, Tawny, planned to switch the paternity results. It’s not at all shocking that this blew up in Amber’s face. How about surprise him instead with his favorite cologne or a new sweater? Something that says “I love you,” rather than “I’m a whack job!”

8. Steal his or her baby: Not the greatest way to someone’s heart! On “The Young and the Restless,” Adam had stolen Sharon’s baby, Faith, and given her to Ashley. Sharon temporarily left Adam when the truth came out, and even though she’s kind of lost her mind and taken Adam back, it’s still not the greatest move to pull this love day. On “Days of Our Lives,” EJ had Sydney kidnapped to try to get even with Sami. He ended up using the situation to try to get Sami to fall in love with him again. Uh that’s one way…not! Want to make someone fall deeply in love with you? Steal some poetry and recite it instead of stealing a baby!

7. Pretend to lose your memory:
This might seem like a clever idea at first, but pretending to lose your memory about your break-up with your ex isn’t the best way to get him or her back for Valentine’s Day. Jana’s plan on “The Young and the Restless” didn’t work for her. She faked amnesia to hold on to her ex-husband, Kevin, but his mind and heart were clearly set on Chloe. Learn from Jana and don’t guilt-trip your ex to stay with you this Valentine’s Day! If you really want to play pretend – why not do it in the bedroom?

6. Send him or her to a deserted island:
Does distance and time apart make the heart grow fonder? Not exactly for Victor and Vivian on “Days of Our Lives.” Kate and Brady secretly lured Vivian and her manservant Gus away to Victor’s uninhabited island. He wanted to get his revenge on Vivian for stealing his company and estate away from the family. Maggie convinced Victor to bring Vivian back to Salem by promising she’d go on a date with him. Once Vivian returned, she proudly told Victor she’d give him a divorce. Guess she didn’t appreciate his vacation getaway gift to her! Want to show her you love her? Go to a spa or surprise her with a vacation – together.

On “Days of our Lives,” Philip and Chloe screwed things up so they couldn’t celebrate Valentine’s Day with their spouses. Chloe had sex with her stepdaughter’s husband, Philip, when she thought that Daniel was cheating on her with Carly. Add to that, Chloe ended up pregnant with Philip’s baby (or was it?) leaving both couples separated and miserable! To avoid such misery this lovers’ day, perhaps it’s best to cook a romantic dinner instead of cooking up some lies.

4. Hide him or her away:
Desperate to hang on to your love? Keeping him or her near you forcefully might not win you points. Whether you’re hiding a lover away in some basement as Stefano did with Marlena years ago, or hiding her in a sarcophagus as Victor let his grandson Brady do to Vivian on “Days of Our Lives,” your Valentine might not appreciate being kidnapped or locked somewhere (usually?). Want to play hide and seek this Valentine’s Day? Why not hide your V-Day gift and have him or her search for it? Sure beats hiding him or her away from the world!

3. Lie or keep secrets:
This is a no-brainer! Keeping secrets and lying to your partner is something to avoid. Natalie and Brody on “One Live to Live” had been lying to their significant others, John and Jessica, about their one night stand. This resulted in Natalie’s baby’s DNA test proving that Brody, not John, is her son’s father. Neither John, Jessica nor Brody knew this. On “All My Children,” Greenlee wouldn’t tell her fiancé, Ryan that his ex-girlfriend Madison is pregnant with his baby. Can anyone else see where these webs of lies always lead? If you’re going to tell white lies this Valentine’s Day, it might as well be to plan a surprise for your Valentine.

2. Impregnate yourself without your man’s consent:

Trying to get some serious commitment from your partner this Valentine’s Day? Drugging them into sleeping with you to get you pregnant may tie you two together, but probably won’t make him too happy. Take it from Daniel on “The Young And The Restless” after the psycho Daisy drugged him and pretended to be Amber so that he’d have sex with her. Ashley impregnated herself with Victor’s sperm to have Abby. Years ago, on “Days of our Lives,” the whacky Vivian stole Kate and Victor’s Petri-dish baby so that she’d carry their son, Philip. As you can see, none of these couples are still together, kid or no kid! If you really want to start a family, why not say it with a gift, like lingerie?

1. Try to kill him or her:
The number one thing you probably shouldn’t do to your Valentine… If you want to have a Valentine this Love day, it’s not a great idea to kill him or her, is it? After almost tying the knot with EJ on “Days of our Lives,” Sami learned the truth about EJ kidnapping her daughter. With Kate’s warnings that EJ was going to take the kids and run, Sami ended up shooting her ex in the head. Red may be the color of love, but a bloody Valentine isn’t the most romantic now, is it? Opt for something else that’s red – roses, a heart-shaped box of chocolates – anything that says “I want you alive.”