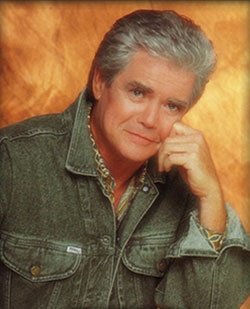 With high profile roles on Another World, Days of Our Lives and One Life to Live, Joe Gallison spent 27 years acting in soaps. Now enjoying life outside of “the business” in North Carolina, Joe works mainly in theatre, but still takes the occasional television and movie role. I recently caught up with Mr. Gallison and found out what he’s been up to since we last saw him in Salem, where he played opposite Gloria Loring (ex-Liz Chandler) as Dr. Neil Curtis, who was his alter ego from 1974-1991.

While not the first place you would associate with making movies and TV, North Carolina hosts more production than you would think. With a movie studio right in Wilmington, where Joe lives, he occasionally goes out for film and television roles. In fact, when I talked with him, he had just gotten back from an audition for a part in a Kevin Costner flick.

When I asked why he chose to move to North Carolina, Joe told me, “It just seemed to be time. I had a terrific career. I worked almost constantly from day one and I got to the point where, you know, I left Days and I did a few things in L.A., but it was a couple years where it was slowing down, especially for people in my age group and I lived most of my adult life in New York City or Los Angeles and I wanted something else.”

Living in Wilmington now for 11 years, Joe recently appeared in, among other things, One Tree Hill (which films in NC) and does a lot of theatre work. His next appearance will be in a play entitled Rubbers. Yes, it’s about exactly what the title suggests. As Joe explained, Rubbers “is a farce about the New York legislature passing the law to allow condoms to be displayed in drug stores. It’s very, very funny.”

Comedy is something he’s now drawn to after playing serious roles on soaps for so many years. But that doesn’t mean he didn’t enjoy the characters he portrayed, especially Dr. Neil Curtis on Days of Our Lives. “I enjoyed Days of Our Lives because I had a wonderful character, kind of the bad boy and that’s always more fun to do than the good guy,” he reflected.

As Dr. Curtis, Gallison was paired for a time with Gloria Loring, whom we also recently interviewed. Discussing his time working with Gloria, Joe shared, “We had a great working relationship. She’s very effective and a wonderful singer; she sang on the show. And she was a trooper.”

While the character of Neil Curtis ended his run on soaps, his daytime career began with him playing Bill Matthews on Another World from 1964 -1969 and then Tom Edwards on One Life to Live from 1969 – 1971. He particularly enjoyed his time on Another World, as when he first started, soaps were still airing live. “I really enjoyed that because it was a sense of excitement and a sense of immediacy that you don’t get with doing retakes and doing taped TV,” Joe explained.

This rush he felt doing live television is why as an actor, he prefers theater. “Theatre is the actor’s medium. Anything with a camera is a director’s medium. You got the immediate response of the audience, which is always fun.” We then joked how actors at least hope the audience response is in fact fun.

While theatre may be his favorite medium, Joe let me know that he believes working in soap operas is the most difficult format stating, “I enjoyed the challenge of soaps. I think it’s the toughest medium in the world to do right. Especially when you’re doing four or five shows a week. It’s a lot of pressure.”

With the declining numbers in ratings, shows being canceled and actors getting fired due to budget cuts, I asked Joe what he thought about the future of daytime. He mused, “I think there’s a market. I think people enjoy the intimacy of soap operas. The advantage soap operas have over other mediums is that because it’s five days a week and you have coffee with these people, and I get this from a lot of fans, they just feel like you’re part of the family. It’s day in and day out and you take time to develop characters the way you can’t do it in a [primetime] show.”

As for a return to soaps, Joe doesn’t rule it out, but says living in North Carolina makes it a little difficult. However, moving back to L.A. or New York for any role, soap or otherwise would take something “extraordinary.”

For now, Joe enjoys his life in Wilmington because, “I’m pretty busy in theater and occasional roles come along on film. Pretty much I’m playing golf and doing theatre and enjoying life.” And really, with a schedule like that, who wouldn’t?

I’d like to thank Joe for taking the time to talk with me and hope to see him on the big screen along side Kevin Costner soon.