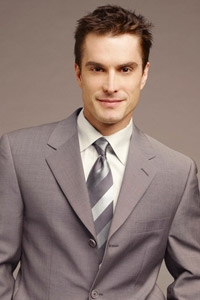 It’s always nice to hear from a fan whose dream has come true through meeting some of their favorite soap stars. Recently, Soaps.com had the pleasure of hearing about one of our reader’s up close and personal experiences when she attended the St. Louis Auto Show!

We knew Becky met both Colin Egglesfield (AMC’s Josh Madden) and Rick Hearst (GH’s Ric Lansing), but we were curious who she most looked forward to meeting at the event. “I wanted to see Colin again,” Becky admitted. “But I always enjoy meeting soap stars who I haven’t met before. I have met Colin twice before, but this was the first time for Rick.”

Isn’t it strange how you feel as though you know the stars just from watching them daily on the soaps? Realizing the actors are in fact very different from their onscreen alter egos, we wondered what Becky learned about each of the guys after meeting them. “I found out how loyal Rick is to his fans, and how much he loves all of them,” Becky said then also added, “Colin was funny.” If she had to describe each guy in five words or less, Becky depicted Rick as, “Loyal to his fans big time!” and Colin as, “Very funny and friendly!”

Even the calmest person would understandably be nervous when heading out to a meet and greet with their favorite actor. However, Becky amazingly wasn’t nervous at all, as this wasn’t her first time attending an actor appearance. “I have met a lot of actors… I have been to eleven Super Soap Weekends. I’ve been to New York one time for the All My Children and One Life to Live fan club event, which I am going to this year in August. I went on the 2007 Soap Cruise, which was so awesome to me. I love Cameron Mathison (AMC’s Ryan) the most. I get real excited when I see him. I got some great shots at the pool that Sunday morning. He was up there with his mom and I got his mom to take a couple of shots, plus I took some. He did remember me from other events. He told his mom that I am his biggest fan.”

What a lucky girl! Not only has she met all of these great actors, to have one of them delegate her as their greatest fan is an honor in itself!

Soaps.com wants to thank Becky for sharing her story with us today. We encourage our readers to feel free to Contact Us with their actor encounters! Not all fans are lucky enough to have the means to meet their favorite stars, so we might as well live through the experiences of those who do!

Joe Gallison Recalls His Time on...