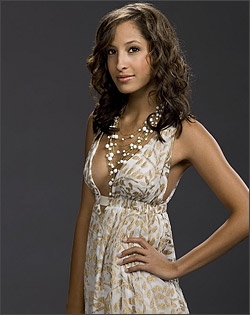 We are happy to report this year’s 39th Annual NAACP Award winners who were honored last night at the live ceremony for excelling in achievement and performance in the arts! The Young and the Restless actor Kristoff St. John (Neil) walked away with an award for Outstanding Actor in a Daytime Drama Series while The Young and the Restless actress Christel Khalil (Lily) took home the award for Outstanding Actress in a Daytime Drama Series! Soaps.com wants to send the on-screen father and daughter duo – as well as all of their fellow daytime nominees – a huge congrats!

Victoria Rowell (Y&R’s ex-Dru) also won an award in the Literature Category as a debut author for her book “The Women Who Raised Me: A Memoir.” Major congrats!

Recently Soaps.com’s General Hospital writer, Julie Clark Robinson, interviewed GH’s Nazanin Boniadi (Leyla Mir). When asked if she had any information as to whether there might be a problem with the February 14, 2008 airing of the NAACP Image Awards due to the writers’ strike, Nazanin responded… “I heard that the NAACP just got a waiver from the WGA to go forward and air the Image Awards.” Again, we want to wish all the nominees the best of luck! We’re very happy the awards will go off without a hitch!

With the New Year comes the anticipation for yet another award ceremony… The 39th Annual NAACP Image Awards!

The National Association for the Advancement of Colored People, set to air on Thursday, February 14, 2008 from 8:00PM to 10:00PM Eastern time on FOX, will honor those nominees and winners for their unique contributions in the television, recording, literature and motion picture business! Given all the political and environmental issues going on today, the NAACP will be using eco-friendly programs as a way to do their part to help save the world’s climate.

With a theme for the February event titled, “Stand Up and Be Counted,” without further ado, here are this year’s daytime nominees!

Christel Khalil (Lily) – The Young and the Restless

Kristoff St. John (Neil) -
The Young and the Restless

Bryton McClure (Devon) -
The Young and the Restless

After receiving over 1,200 entries, a team comprised of 300 of the industries professionals and leaders chose five nominees in each of 44 categories to include the ceremony’s entirety. Although artists, managers, publicists, production companies, record labels, studios and/or network and publishing houses were able to put forward an entry, the final winners will be voted in by members of the NAACP and will be announced on the big night in February!

Soaps.com wants to wish all nominees the best of luck! No matter who wins, everyone in daytime is a winner to us!

Third Annual Touched By A Star...